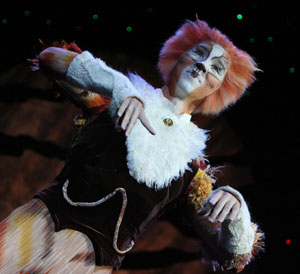 “Cats” was the first show my parents took me to over 20 years ago in Mexico City. I remember the show being flawless, perfection from the moment you entered the space. Great detail went into designing a junkyard where cats hung out, from an old bra hanging off of a broken telephone wire on the wall to an old tire leaning against the corner of the stage. Then the theater grew dark, fluorescent cat eyes glowed all around us as the meowing grew louder and louder. My little brother and I were entranced! This was the show that started my love affair with live theater. I was thrilled to hear it was coming back for a limited two-week run at the Pantages, and I set a date to revisit old memories.

This musical about cats is based on T.S. Eliot’s Old Possum’s Book of Practical Cats, a book of poems Andrew Lloyd Webber discovered at an airport bookshop. “Cats” became one of the longest-running musicals on Broadway, ending its 18-year run on Sept. 10, 2000 with 7,485 performances and a number of Tony Awards under its belt.

Although this touring company’s production of “Cats” did not surpass my memorable first experience in Mexico City, I still found the show to be well performed. The music continues to be beautiful and the singing magical, particularly Anastasia Lange’s delicate portrayal of Grizabella. The ensemble pieces were right on cue and flowed nicely.

Still, the show itself seemed outdated. No effort was made to spruce up or reinvent an old wheel. The costumes, the staging, the lighting and the choreography were very 1980. The story itself was not easy to follow. Yes, this is a classical piece of live theatre, but they are trying to sell it to a 21st century audience and I wish they would have tried harder.