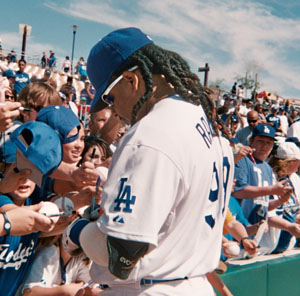 To experience the atmosphere of spring training is to, in some small way, take a step back in time when the game of baseball was a pastoral activity. A time before mass communication, corporate underwriting, mega-stadiums and multi-million dollar contracts – a time when baseball was, well, a pastime played for fun before all else.

Of course, this view is an illusion in many ways – but what a lovely illusion, what a deliriously delicious dream. Under the warm sun of a cloudless afternoon, the “pap” sounds of balls being shagged, the “crack” as they are swatted during batting practice. In such a beautiful environment it is easy to forget the ills of this world, and this is why, I suspect, so many baseball fans from around the country migrate every March to the cacti-spotted deserts of Arizona and the beaches of Florida; a chance to partake in the excitement, to share in a grand vision of glory.

For already in this first month of spring, the dreams of October triumph begin to take shape. Even for the lowliest, minor leaguer fighting for a chance to stand out, the idea of a World Series appearance exists like a precious fantasy, one that brings a smile to the face of the rookie and intensity to the eyes of the veterans.

For the fans, it is a thrill to simply see ballplayers in uniform, especially if it is the uniform they root for. How it is that the ballplayer acquires such an allure is hard to say.

Surely, the physicality of the professional athlete is an impressive sight. Ballplayers are invariably strong men, yet it is more than mere stature, for the athlete possesses a certain swagger, some more than others. Anyone who has watched Manny Ramirez take batting practice cannot deny the magnetism that star athleticism holds.

So it is an aesthetic thing, that’s what it is, baseball removed of its fierce competitiveness. Which team wins or loses is a small matter, almost negligible. On the other hand, how certain individuals perform matters, the passion and hunger show, and you can watch how camaraderie among players begins to take shape. These things are endlessly fascinating.

In these tough economic times a road trip to spring training may seem like a luxury, but there are a few good reasons to head to Arizona before it ends on April 3. Tickets to games at Camelback Ranch go for as low as $10 (sometimes even less), and Wild Horse Pass Resort (5594 West Wild Horse Pass Blvd., Chandler; wildhorsepassresort.com), located on the outer edges of the 372,000-acre Gila River Indian Reservation, is offering a “Homerun” package through April 5. This spectacular hotel faces the broad expanse of flatlands, which is the homeland of two harmonious tribes, the Pima and the Maricopa (pop. 22,000+). The hotel’s design is influenced in innumerable ways by the still-thriving culture of the original inhabitants and it’s the first Geo-Green resort in the world.

When you’re not at the ballpark, there are a number of activities to wile away the hours. First stop, the Aji spa (which means sanctuary in Pima). Here, you can sit in the whirlpools (both indoor and out), take a yoga or meditation class or treat yourself to a Matchut (Aji) massage. Then, for the rest of the day, you can lounge around the pools, sauna and steam room and order lunch from the Aji Café.

A two and a half mile interpretive trail winds through ancient Tribal land alongside their re-created Gila River. You’re bound to see herring gulls, mallards, doves, quail and ducks.

For the more adventurous, meander over to the 1,000-acre Koli Equestrian Center. A slow, easygoing ride around the property (hopefully by a guide named Roger) allows you to take in the beauty of the surrounding South and Estrella Mountains while you spot sand owls, coyotes (sometimes) and Gila monsters (rarely). A brief stop in a replica of an old Western town (Rawhide) is way better than Disneyland!

Golf lovers can tee off at Whirlwind Gold Club and when your tummy starts rumbling, head over to Ko’Sin Restaurant (which means kitchen in Pima), open for breakfast, lunch and dinner. Whether you choose the Spiney Lobster Tail Corn dog or splurge on the filet mignon, you’ll hit a home run.