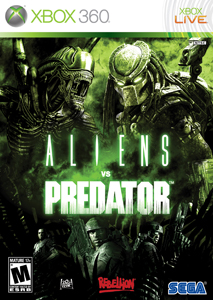 If you go into the multiplayer lobby of the latest incarnation of “Aliens vs. Predator,” there is a good chance that you will have trouble finding any signs of humanity. That is not to say that there is any lack of players waiting to repeatedly frag you without any signs of pity. Rather, it means that you may have trouble finding a human character within the chaotic bloodbath.

Now, I get it. It’s “Aliens vs. Predator,” not “Aliens vs. Predator vs. Humans.” The humans in the films are basically there as meat to be harvested for their spines or impregnated with chest babies. They run, they scream, they die and eventually the few survivors somehow manage to find some deus ex machina to overcome the obviously far cooler extraterrestrials. It is important that no matter how overwhelming the numbers of humans are, they never seem better than the creatures that are killing them.

This defense falls apart a bit in a game where you can play as all three races. When playing the aliens, you can crawl silently across walls, slash enemies to death with razor claws and execute silent kills that include forcing a face-hugger alien over your prey’s mouth. As the predators, you can turn invisible, attack up close with blades or at a distance with lasers and literally rip heads off of their bodies.

Humans get guns. There are cool guns, yes, but most of the time, the humans have to stay awkwardly close to their foes to overcome the aliens’ natural camouflage and the predators’ cloaking abilities. At that range, even the Marines’ standard issue proximity detector can’t save the soldier from being quickly returned to the respawn screen.

So, you may ask, why would game designers even include humans in the mix? If everyone wants to play as the two title species, why not spare some virtual lives by leaving the humans back on Earth? Sure, you need the inevitable evil corporation to start the mess and aliens need fresh incubation sources, but they could be killed off before the game starts. Why can’t game designers take pity on these poor, virtual Marines and let them sit one slaughter out?

That aside, “Aliens vs. Predator” knows what its players want and delivers exactly that. Their fans want the first-person combat to be intense and filled with horrifying mutilations that earn the game’s Mature rating. They want some semblance of a storyline, but only just enough to mask the ultimately repetitive single-player experience. They want quick multiplayer action with stages just large enough that they might make it out of the spawn area before somebody dies.

As with previous titles, you can play through the storyline as an alien drone, a predator warrior or as a Marine. The three storylines weave together, meaning that you can’t discover the full story until you have played through each storyline. Throw in a survival mode and a multiplayer mode with various local and worldwide matchmaking options and you have the standard “Aliens vs. Predator” package.

All of this also means that this game has very little innovation or improvement over “Aliens vs. Predator” titles of the past or other first-person shooters. The linear gameplay across confined stages should be extremely familiar to anyone who has played an FPS within the last decade. The guns are mostly familiar from any futuristic military fare, and the butts of each and every weapon that humans carry have a greater stopping power than the bullets – just like in every other shooter. Even the prettiest of stages seem somehow familiar and ultimately forgettable.

Of course, all of this is ultimately irrelevant for this title. The game is there to be fun, brutal and intense. If you are stopping to smell the digital flowers, you aren’t playing the game right. Like the recent films, the point is to enjoy the mindless carnage, and “Aliens vs. Predator” does mindless carnage well.

Assuming that you do care about things like story, character balancing and other similar factors, this may not be the strongest title for you. If you just want to jump into a game and kill stuff, this is definitely worth looking into.

If the rights of virtual, futuristic soldiers are important to you, though, you should definitely avoid this game. There is just not much love for humans here.