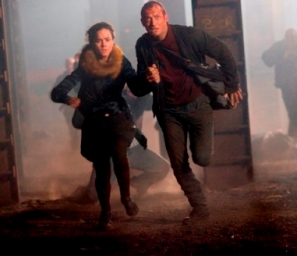 Remy (Jude Law) and Jake (Forest Whitaker) are repo men for a company called the Union. The Union sells very expensive artificial organs to desperate people. Since most of us don’t have $600,000 to spend on a new pancreas, the Union helpfully offers payment plans. But if you fall too far behind on your payments, the Union sends out its minions to repossess its product. In this case, unfortunately, getting your product repo’d means also losing your life.

Ironically, Remy suffers heart failure while repo’ing someone else’s heart and wakes up with an artificial heart from the Union implanted in him. Not only does he not want the heart, he also doesn’t have the heart for his old job anymore.

Remy then goes on the run with another defaulted customer (Alice Braga). They hope that the combination of his training and knowledge of the business and her street smarts and connections will keep them one step ahead of the repo men hot on their tails.

As with most stylized thrillers, a certain amount of suspension of disbelief is needed to really enjoy the film. If you enjoy thrillers like Kill Bill, The Matrix and Wanted, then you will probably enjoy Repo Men. If you think you will be offended in any way by the graphic violence and action, then you probably will be.

Repo Men isn’t for everyone, that’s for sure. But if you’re twisted like me, then you might agree with me when I give it a ...