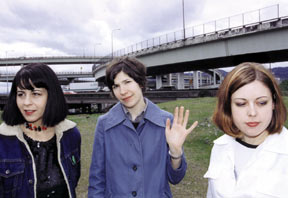 They say timing is everything (I guess it’s just an exception that Ewan McGregor and I were in the same elevator at the same time and we’re not married--yet). And for Sleater-Kinney, good, or at least interesting timing results in a record that is both beautifully epic and satisfyingly rockin’, making critics once again squeal with glee over this Portland rock threesome. One Beat, the album currently causing these high-pitched outbursts, was recorded at a time when singer Corin Tucker had just given birth to her first child, all three members lived in the same city for the first time, and the World Trade Center had just crumbled to the ground. "I think that it was just the enormity of what was happening in this country and personally, that in combination with having the time to sort of write songs that come from maybe a deeper place, musically," explains Sleater-Kinney drummer Janet Weiss. "It's hard to put your finger on why things turn out the way they do, it's just something in the air."

Previous to the album, the band had taken a year off to pursue side projects and the simple life. After that, Sleater-Kinney found themselves back in the studio with renewed energy, ready to make a record unlike their others, which were often conscious reactions to previous albums. Weiss tells of the significance of the break, "On this record, taking the year off, really taking a year off where we didn't play together, we just came to the table feeling rejuvenated. It wasn't like we were reacting to anything at all, and we were just interpreting what was going on in our lives at the time."

And what had been going on was a series of events that affected both the lives of Sleater-Kinney and the world. For lead vocalist Corin Tucker, becoming a mother altered not just her sleeping schedule and number of toys on her living room floor, but also the significance of her music, and forced her to reevaluate the role of the band in her life. "Corin having a kid," Janet describes, "it makes it a lot harder for her to get time to write and time to play. On one hand, it puts things in perspective, I mean, her family is obviously the most important thing in her life. But it also puts in perspective that this band is really important as well, and necessary. She has to fight for the ability and the time to be able to do this. And I think that makes the pay off, when the record comes out, all that much more rewarding."

Corin's fighting does pay off in this album, with her stunning vocals piercing through each track. More than any other record, One Beat highlights the power of Tucker's voice and its ability to evoke goosebumps and achieve greatness. Going far beyond the punk-inspired staccato yelps of Sleater-Kinney's early records, Corin now finds a perfect balance of beauty and intensity. Weiss tells of recording the vocals for the final track of the album, "Sympathy," which puts Tucker's voice on a pedestal: "When she sang that in the studio, we were crying. It was really one of those moments that I'll never forget. I'm glad it comes across because obviously no one can share that moment when you hear something like that for the first time, in person, in the studio…That song is a complete vocal take as well. It's start to finish the same take… a once in a lifetime take."

These recording sessions were able to capture such spontaneous musical brilliance, partly because the band was now able to write and record when inspiration struck. Up until recently, guitar player/vocalist Carrie Brownstein had been living at least two hours outside of Portland, Oregon, where the rest of the band called home. As a result, practice sessions involved long drives and even longer planning. With Carrie's move, as Janet explains, "We had more of an opportunity to write when we were inspired…and could practice a smaller amount every day. When we would drive two hours to go to practice, we would have to have these long, marathon practices. But this way, we could work on things two hours a day, which allowed us much more time to sort of think about the songs."

It is this attention to detail that makes each track on One Beat an epic musical experience. "The only conscious move we made on this album was to take chances, and to challenge ourselves," says Weiss. And Sleater-Kinney did challenge themselves, with both the music and the lyrics, which attempt to grasp at controversial concepts and emotions that were, at the time, radiating through the nation as a whole. In the song "Far Away," Corin reflects on the frenzy of September 11: "7:30 A.M./Nurse the baby on the couch/The telephone rings/Turn on the TV/ Watch the world explode in flames." The band challenges not only themselves with this record, but also the listeners, asking them to have the courage to accept change during these times. Janet explains the meaning behind the title track of the album, "I think that the narrator in the song is asking the question, 'I am a solution to these problems you're having. I am this mysterious, unknown, never before seen solution to these problems. Would you be willing to give up everything you know, all of the ways you've known to solve problems, all of the ways you know to exist and function, to live; would you be willing to give all this up for me?' For the times we're living in today, I think that's a really intriguing idea."

It is ideas like these that push Sleater-Kinney far beyond the labels of riot grrrl/girl punk that previously limited them. This record covers more substantial ground the feminist ideals that typify these categories. "We've taken the spirit of riot grrrl, some of the politics of riot girrl, we've learned from that and respected those people who were trying to change things, and done our own thing," Janet clarifies. "We make music for ourselves. We happen to be women but the music is not directed at anybody specifically."

Whether or not it's directed at anybody, One Beat proves to the music world once again that Sleater-Kinney is on the forefront of rock. And though the timing of the album makes for songs of tragedy and self-reflection, Janet tells that the overall message is a happy one. "I think that although a lot of the themes on the record relate to sort of despair, I think that the ultimate one is of hope in the light of darkness." This light is perhaps the ability to take the combination of the good times and devastating times and create out of them something strong and beautiful and, at the very least, a great new album to scream with in your car.