Rich McCulley: Starting All Over Again 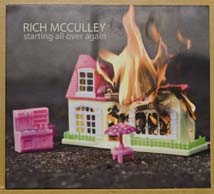 From the lyrics on Rich McCulley’s fifth album, Starting All Over Again, it’s clear that the Fresno native has suffered something deeply saddening. Everything about the album from the cover art (a burning plastic dream house) to the picture of a lonely and tortured-looking McCulley on the inside, right on down to the lyrics (“Try to love in a world so hard/close your weary eyes”) reflects the toll that the deaths of Amy Farris and Duane Jarvis in 2009 has had on this artist.

The album is both a tribute to his friends and obviously a form of working through the pain, as McCulley moves from songs that go from defeat in “The Last Song” to the memorial that is “Who’ll Hang the Moon (Song for DJ)” to “Falling Apart” and finally acceptance and “Starting All Over.”

And yet, the songs still sound overtly upbeat. Despite the heavy theme, it’s a little poppier than your typical folk-tinged country album and less moody sounding than 2007’s Cerro Gordo, bringing us back to the dream house on the cover. Just like the house, the album is pretty on the surface, but there’s something eating away at its insides when you look a little closer.

Starting All Over Again is currently available.