Static of the Gods: Knowledge Machine 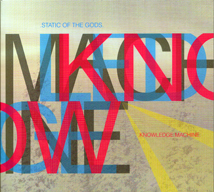 If a short film were music, it’d be Boston’s Static of the Gods’ indie, electro-pop album, Knowledge Machine. Its dreamy, trance-like sound gives off that film vibe. The enchanting melodies and soothing, vulnerable vocals have potential to transport you to another world of sulky love songs, satisfying meals and glacial lands.

Their interesting sound is quite captivating, but as the last track rolls around, it’s as though you’ve been listening to a 43-minute long song with a tempo that occasionally speeds up. On the up side, the band’s lyrics are two thumbs way up. “We keep taking the same photos, faces frozen, repeated poses” and “I planned and planned, for days and days, ’til you came into the frame and it all came to nothing” are only two of the many quotable lines on their second album.If you forward through some of the songs, make sure to let the following scenic tunes play at full length: “Talk You Down,” “Church Bells,” “Eating Well” and “Meteor Flights.” The four tracks combined give you the gist of what this album is all about, but for the full chill-down-your-spine effect, start at track one.