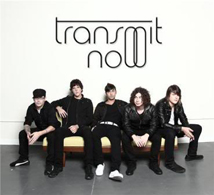 Transmit Now descends from the coattails established by alternative rock bands of old: Ataris, Atreyu, Augustana … the list goes on. Their LP, Downtown Merry-Go-Round, straddles elements of hard rock and power ballads capable of appealing to either commercial or underground audiences.

It packs a power of amply harmonious guitar melodies and crescendoing drum beats over the dominant voice of a male lead singer typical of the genre (Maybe he might be cute, too!). Nothing we haven’t seen before of course, but ever still refreshing in their take of heartbreak and unrequited longing.

Their second track “Posterboys” holds its own for reminiscing long gone summer days and their piece “Pick up the Phone” becomes a power ballad of converse sneakers in full spasm with its clever and cutesy lyrics. Particularly enjoyable is the band’s versatility initialing elements of auto-tune manipulation and über-catchy guitar rhythms suitable to head-bopping at the El Rey.