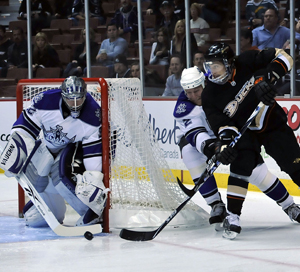 Ducks winger Teemu Selanne is searching for a contraption that would convert goals into points for both the scoreboard and the regular season standings. After all, the Ducks need to make up seven points in their final 10 games, and the Finnish Flash has a few goals to spare for his team to keep its very slim playoff hopes alive.

While such a device has yet to be invented, Selanne, who scored his 600th career goal during a 5-2 victory over the Colorado Avalanche on Sunday night, may have to settle for his possible final NHL season to be one of personal milestones but team disappointment.

To his credit, Selanne (1,248 career points) is only the 18th player in NHL history to join the 600 Goal Club, whose membership includes Wayne Gretzky, Mario Lemieux and Luc Robitaille. He is also just the third-ever European-born NHLer to score 600 career goals, joining fellow Finn Jari Kurri and the Czech Republic’s Jaromir Jagr. If only Selanne’s personal successes were enough to help the Ducks qualify for next month’s Stanley Cup Playoffs.

Still, should the Ducks miss this year’s playoffs and Selanne carry through with his retirement plans, the right winger should not be disappointed with his resume. His 373 career goals as a Duck are a franchise record. He also helped the Ducks win a Stanley Cup in 2007. Even more, Selanne’s career numbers indicate he is the consummate team player, notching more assists (648) than goals (600). He has become the face of the franchise and helped Anaheim establish itself as a legitimate NHL club despite its Southern California roots.

While Selanne would love his 600 Goal Club membership to include a Stanley Cup trophy, the Finnish Flash has a lot to be proud of should the Ducks fall short in the coming weeks.