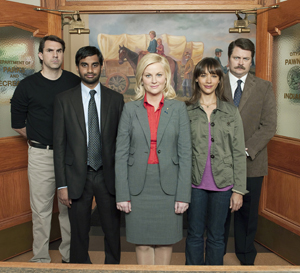 Are you one of those Angelenos who fancy yourself a frustrated New Yorker at heart?

I know, I know, Los Angeles is the city everyone loves to hate.

But I challenge all of you haters to enjoy an evening at Largo and find your inner “I love L.A.” child.

Brimming with a talent pool that in March alone included musicians like, the Watson Twins, the Swell Season and She & Him, as well as comedians like Paul F. Tompkins and Janeane Garofalo, Largo will have you feeling like a smug insider in no time.

I had the privilege of seeing Tig Notaro with the cast of “Parks and Recreation” and found myself feeling like a guest at the world’s coolest party. Known for her work on “The Sarah Silverman Program,” Notaro is a comedian with her own special brand of deadpan.

In typical Largo fashion, Sarah Silverman just happened to be on hand to introduce Notaro’s set and got in a few chuckles of her own.

“Park and Rec”’s affable Nick Offerman sang a couple of hilarious songs about romance and religion that managed to be both sweet and strange.

Fellow castmates Aziz Ansari and Retta followed Offerman with some stand-up of their own and I had a whole new appreciation for them as actors and as comedians – their stand-up material revealing the person behind their indelible characters.

After the individual hijinks ended, Notaro played the role of interviewer, with the underrated and hysterical Amy Poehler and the uber-funny Aubrey Plaza joining Ansari, Offerman and Retta for a round of non sequitur-stream-of-consciousness-riffing.

They even took some questions from the audience, which resulted in a possible date for Plaza and a doppelganger for Ansari.

All in all an evening to remember and make me wonder why I don’t go to Largo every night.