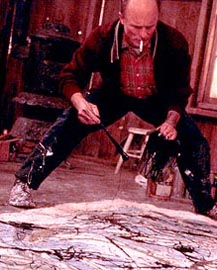 In the 2000 independent film Pollock, the adaptable Ed Harris starred in the title role of the late artist who, though leading a tumultuous life which ended when he was a mere 44 years old, proved to be an extremely innovative painter. Harris also directed the film – a pet project which took him nearly 10 years to bring to the big screen – and even earned an Oscar nomination in 2001 for best actor. Even though he didn’t win (his co-star, Marcia Gay Harden, did take home a best supporting actress statue), Harris’s Pollock brought the life and work of the pioneering artist (full name: Jackson Pollock) into the limelight.

At 4 on Sunday afternoon, June 5, actress Amy Madigan – Harris’s real-life wife who portrayed flamboyant museum patron Peggy Guggenheim in the film – joins Getty curator Mary Morton to discuss the film, the artist who inspired it and what it was like to co-star in her husband’s love letter to the late painter.

Madigan, who most recently starred in the dark HBO series "Carnivale," has also appeared in Places in the Heart, Riders of the Purple Sage and Field of Dreams.

Tickets to the event are free, and reservations (which are mandatory) can be made by calling (310) 440-7300 or by visiting the museum’s Web site at www.getty.edu. The lecture will be held in the Harold M. Williams Auditorium.

This event is held in conjunction with "Interjections," a loan exchange program between the Getty and L.A.’s Museum of Contemporary Art. Through June 12, Pollock’s drip painting, "Number 1, 1949," can be viewed in the Getty’s West Pavilion.

The Getty Center is located at 1200 Getty Center Dr., in Los Angeles. Price: Admission is free; parking is $7 per car.