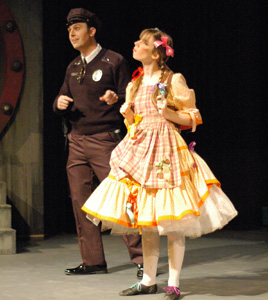 The title is not a complete giveaway, but the musical production of “Urinetown” takes itself about as seriously as Rodney Dangerfield. Thankfully, when the curtains of Santa Monica’s Morgan-Wixson Theatre arose for the opening night of “Urinetown, The Musical,” it was gleefully obvious to those in the know that this ex-Broadway production would be far more qualitative than the former comic.

“Urinetown” maintained a level of comedy and raunchiness that was more a social commentary on other musicals than a nihilistic production of how one responds to Nature’s call. A two-act musical mythically set in a “Gotham-like city, sometime after the Stink Years,” “Urinetown” centers around a group of poor people, their costly use of the public pay urinal Amenity No. 9 and the facilities’ evil corporate owner, Urine Good Company.

As hilariously funny as the musical’s title, nemesis and plot might be, what is even more hysterical is how “Urinetown” parodies other well-known productions in its genre. Sure, the characters have cutely funny names like Officers Lockstock and Barrel, Penelope Pennywise, Little Becky Two-Shoes and Senator Fipp.

But the real humor is in the musical acts of the show’s first half that are reminiscent of “Fiddler on the Roof.” Indeed, the most memorable number – Penelope Pennywise’s belting piece entitled “A Privilege to Pee” – is not only energetically well-performed by the raspy voiced AnnaLisa Erickson but also a comic ode to some of Broadway’s finest.

Other numbers hilariously conjure up memories of other musicals, such as “West Side Story” and “Chicago” – and if you have not seen such musicals, then the humor of “Urinetown” will easily be lost.

Parodies and lack-of-seriousness aside, perhaps the greatest strength of “Urinetown” is not its social commentary but its daringly deadpan sense of self-deprecating humor. Oftentimes, the audience will hear Officer Lockstock (Justin Waggle) mockingly telling Little Sally (Andrea Paquin), “Dreams only come true in happy musicals.”

With a well-performed good-versus-evil story between Bobby Strong (David Laffey), Caldwell B. Cladwell (Michael Heimos) and a solid supporting cast, “Urinetown” will definitely leave its musical savvy audiences tickled with laughter and happiness.