Hot Tub Time Machine: Hollywood funny men go back to the past. 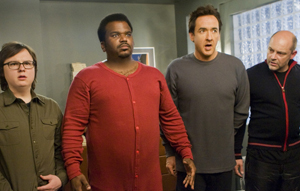 When Back to the Future released theatrically in the mid-1980s, it was a huge success. People loved the tale of good-natured but down on his luck Marty McFly utilizing a souped-up DeLorean to change events that happened years before his birth. It was the feel-good story of the decade.

Twenty-five years later, the premise of time travel is still a favorite among Hollywood writers. However, it’s getting a slightly bawdy and completely hilarious makeover in the new comedy Hot Tub Time Machine.

So how does this time travel occur? Well, it seems that Adam, a nice guy who has recently gotten dumped by his lady, falls into a life-threatening situation. Because of the circumstances surrounding the event, everyone assumes that he’s tried to commit suicide.

In order to cheer him up, Adam’s besties collectively take him back to their favorite ski resort. This is the place where they all had one of their best hangouts as friends. A little drinking ensues, some male bonding takes place, followed by the obligatory passing out. When the guys awaken, they do so not in 2010, but in 1986.

Hot Tub Time Machine is a virtual who’s who of comedic talent. The film stars John Cusack (2012, Say Anything…) as Adam – the steady fellow in the group. Craig Robinson (Pineapple Express, Miss March) shines in one of his more notable and humorous featured roles in an ensemble as Nick. Clark Duke (Sex Drive and the forthcoming Kick-Ass) is Jacob and Rob Corddry rounds out the cast as Lou (The Heartbreak Kid), the douchey friend who can’t seem to shake the ’80s from his present-day life. And keeping the dream alive is a fantastic cameo by Crispin Glover (Alice in Wonderland), who not only appeared as George McFly in Back to the Future but also has a buzzworthy running gag in Hot Tub Time Machine.

Duke, who has been slowly but surely building a name for himself, first with a popular Web site co-created by friend Michael Cera and recently in his television and onscreen roles, has the hilarious task of portraying the nephew of Cusack’s character. Not only does he wind up back in an era that is totally foreign to him, but he has the added weirdness of doing so ... nine months before he was even born.

Duke notes that the film was indeed a time warp for him. He feels that things are definitely much cooler now.

“I think women look better now,” he says. “The clothes and the hair were really unflattering. The tall waist thing does not look good on anyone.”

As for Robinson, he seemed to enjoy the wild fashions brought back to life via the magical hot tub. Of course, his fixation with the ’80s may be rooted in his own past experiences.

“I really wanted a Jheri curl, and my parents wouldn’t let me get one,” admits Robinson. “A lot of my friends had ’em. I remember the day my cousin came over, and his curl was just glowing and glistening and dripping. Oh, it was fantastic!”

Hot Tub Time Machine bears the strong probability of being a wild success based on its pedigree. Plus, director Steve Pink is at the helm. Film buffs may remember his name as the screenwriter of Grosse Pointe Blank and High Fidelity. He also directed 2006’s Accepted (starring Justin Long and Jonah Hill).

With his knack for timing and his melding of sarcasm and physical humor, Hot Tub Time Machine boasts a signature humor that is sure to make it a cult classic. With time travel being a virtually untouched subject for the past two decades, Pink plans on unleashing his take on the subject with a vice grip on moviegoers’ funny bones.

Still, the greatest endorsement for the film and the era can best be found in Cusack. This star of stage and screen rose to fame during the ’80s and therefore is the best spokesman for the decade.

“Hot Tub Time Machine revives the era in every aspect,” says Cusack. “In other words, be prepared to be shocked – it’s a true throwback to the political incorrectness of the time. It can get pretty raunchy – but in an incredibly fun way.”