The Harimaya Bridge: A Japanese Pastoral by an African-American Filmmaker 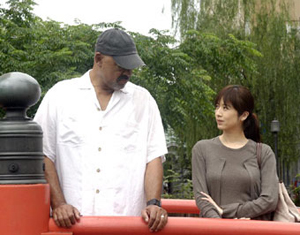 The Harimaya Bridge tells the story of Daniel Holder (Ben Guillory). After his estranged son, Mickey (Victor Grant), is killed in a car accident, Daniel tasks himself with traveling to Japan so that he can collect the young man’s final paintings. The film has already been released in Japan and is now coming to the United States. It is director and writer Aaron Woolfolk’s first feature film. Key to getting the film financed and made was bringing Hollywood Star Danny Glover onto the project, which Woolfolk says happened through a fortunate series of events.

“I applied for a development grant through the Walt Disney Company,” Woolfolk says, and adds, “It was a talent development grant, and to get that grant you had to apply through a non-profit organization. I went to the Robey Theater Company, which was co-founded by Danny Glover, and I got them to sponsor my application. I actually won the grant. So through that, I got to know Danny, he got to know my work – he liked my work – he became very supportive. When it came time to make this film, of course, I wanted him to be in the cast, and he graciously agreed to executive produce it as well. He really helped us get the project going.”

The story found its inspiration in Woolfolk’s own travels.

“It was very much inspired by my time in Japan,” says an enthusiastic Woolfolk. “I originally went to Japan on the JET program, an English-teaching program sponsored by the japanese government. A lot of young people from the U.S. have been doing that right out of college. I spent a year, wanted to stay longer, but I got into graduate school and I had to leave. I’ve been back to Japan almost every year since I left the JET program. It was in those trips back that I began to think that it might be interesting to combine my desire to have a film career with my interest in Japan. That’s when I began to think of the story for The Harimaya Bridge. So, yes, that story was inspired by my time there. One of the central characters, Mickey, is a JET.”

Mickey is also an artist, a detail that becomes a major catalyst for the story’s action.

“I think in writing the script I was looking for a device that would help to bring the main character, Daniel, over to Japan,” Woolfolk says. “Something would compel him to go. You have a character that doesn’t want to go someplace, but something makes him go. I think because of my love of the arts – I like painting and I have a lot of friends who are painters – I thought that would be a nice visual device that could be used.”

Mickey’s art becomes its own character as the film progresses, so of course, great care was taken in the creation of the paintings.

“I went into the film wanting to make a movie that would play and be familiar to a Japanese audience and to an American audience. I went into it wanting to kind of do something that walked this fine line between both audiences so that both would get something from it. I made two short films in Japan for my thesis project at Columbia University, and with those two short films I experimented with trying to make something that would appeal to both audiences. That was kind of like my test run.”