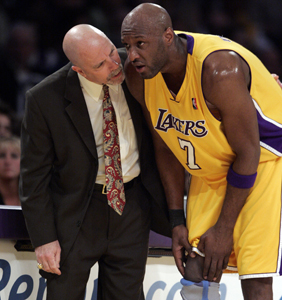 There comes a time every season that an injury seems to happen to the young Laker starting center, Andrew Bynum. On Jan. 13, 2008 he dislocated his left kneecap, then he hyperextended his right knee in January 2009. And, during the third quarter of last Friday night’s game against the Timberwolves at Staples Center, he strained his left Achilles’ tendon.

Luckily, it is not a torn Achilles, which means that the 22-year-old should only be sidelined for a matter of weeks rather than months. And luckily, the Lakers have Lamar Odom to move into the starting rotation (with Pau Gasol transitioning to center).

Bynum has been averaging 20 points, 10.3 rebounds and two blocks in the last four games (The 52-18 Lakers are on a six-game winning streak.). The team definitely needs him to return soon since there are only 12 games left in the season before the playoffs begin.

Although Odom has suffered from a sore left shoulder since Feb. 18, he has averaged 11 points and 8 rebounds in the 15 games since that injury. He should be a solid contributor on the floor in Bynum’s absence.