Annette Bening: Fights the Good Fight With Being Julia 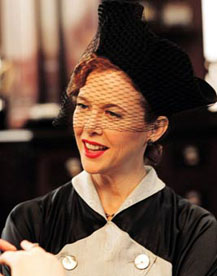 Annette Bening was no spring chicken when her first film, The Great Outdoors, was released in 1988. Hollywood at first didn’t think of Bening, at the ripe old age of 30, as the sexy starlet she would soon become. And while it didn’t take industry moguls much time to notice Bening and her acting abilities, the thespian – who currently stars in this month’s Being Julia – says she appreciates her years of anonymity prior to fame.

In Being Julia, Bening plays the title character who explores the subjects of age and fame, and the effects they can have on an individual. The dramedy, which is based on W. Somerset Maugham’s Theatre, is set in 1938 London. The story revolves around Julia Lambert (Bening), a beautiful, captivatingly famous stage actress who decides to liven up her life by embarking on an extramarital affair with a younger man who claims to be her “greatest fan.”

Although initially exciting and fulfilling, the affair begins to cause new problems in Lambert’s life. She soon finds herself fighting to maintain her status as a leading lady and struggling in a world she once dominated.

Although Bening – not unlike her character – is a well-known, successful actress, Bening claims to have never felt the competition between actresses like Lambert does in Being Julia. Instead, she credits her family (husband Warren Beatty and four kids) along with a realistic view of Hollywood as her ways to remain rational, and consequently avoid antagonism in the industry.

“How you stay sane is being able to have a sense of yourself that is separate from the work,” Bening explains. “I guess everybody has their own way of doing that, or maybe they don’t. Maybe they don’t need that; I guess I do. [I think] it is normal to separate it. Yet, in another way, it is all kind of one big pot … It’s the chaos of it that I love. I love being busy and I love to have a lot going on.”

Even though Bening admits that she had to fight for her role as a young, struggling actress in New York City, she says she doesn’t view actors as more aggressive than anyone else in the working world.

“There is no more [competition in the acting profession] than there is at other jobs. So it’s not about winning. It’s about doing the best that you can do,” she says.

Touching upon Sharon Stone’s recent public assertion that women in Hollywood are discriminated against based on age instead of craft, Bening offers a simple explanation.

“I think that a lot of it [has to do with] commerce. Just commerce. It is not any particular conspiracy against women; I think it is about the all-mighty dollar in Hollywood a lot of the time.”

Discounting the box office, however, Bening says that there are a lot of films available to women. The problem, she says, lies more with Hollywood’s tendency to discriminate against non-blockbusters.

“A lot of people try to make movies that most people in the world will see. There is that element,” admits. Bening. “But there are a lot of people – if not more people – who are interested in filmmaking and [who are] about [making] good stories. It doesn’t necessarily have to appeal to everybody for people to make these stories.

“I am around people all the time that want to make these pictures. I feel really lucky. I don’t feel like I can complain and don’t think it is useful for women to think of themselves as victims of something. Is there a cultural bias against women? Probably. If that is the case – which it probably is – the question is, ‘How do we get this story made?’

“So the way I look at it is, join in. Get in there. Find the story you want to tell,” says the spirited Bening. “And for those of us that are lucky enough, fight the good fight.”