He Goes by Hank 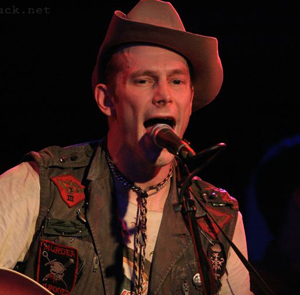 The start to the spring concert season is here, the festivals are gearing up and Hank III is hitting the Sunset Strip for his annual show. Almost every year for the past 10, Hank Williams the Third has been playing the Roxy Theatre on Sunset.

“Every time we play the Roxy, the audience is taken care of. It’s intimate and they take care of the kids. It’s the camaraderie. Someone falls in the pit, they get picked up,” states Hank. “We could play any of those other places, but the energy is better in that room. That’s the big reason why the venue is important. The Roxy is great to us and our fans.”

“That’s one of the things that’s getting tougher out there,” adds Hank. “The venues won’t let the audience enjoy the show. Too many guards telling everyone what they can’t do. I try to meet with the security staff before the show to make sure that the fans have a good time. Sure, someone throws a fist, tell them to cool it, but if you’re letting off steam movin’ around, well, that’s what it’s about.”

That kind of mentality is why this show sold out the second it went on sale months ago. When you take an artist like Hank III and put him in a venue that knows how to have a good time, you get one hell of a show. Still working at his regiment of one month on the road and one month off, this act has made touring a primary weapon of its success.

“Henry Rollins would say all ya need is good distribution. You’ve got the fans, keep doin’ what you’re doin’. And he was right. Finally we are cutting out the middleman. This record comin’ up is my last for Curb Records,” Hank starts to talk about his excitement of finally doing things on his terms. “I produce all my own albums. I have a friend do some protocols and that’s it. I’ve had to deal with a record label taking all the cash for my work. I never sold my CD at any shows because of that. The only money I made off the album comes from the 500 bootleg ones we made!”

With the release of Rebel Within May 25, Hank will complete his obligation to Curb Records and be done with his contract. So, did he just throw some stuff on the CD to get it done?

“Naw, there’s some country, some of the hellbilly stuff, ya know, but then some other acoustic things I put on there that are different than anything I’ve done before. It might surprise a few people,” he says.

Getting back to the live show, Hank explains the method behind his madness: “I put on the longest show for the cheapest price. Always tried to do it for the fans. Someone like me, country music is for the hard workers. It’s their escape, a chance to get away and let loose on the weekend. I sing about drinkin’ and smoking, and all that. People don’t want to be brought down.”

With his own style of music and deep roots in making country music the choice of rebels all over the world, he does keep up on the underground.

“I’m into Wayne the Train Hancock, Dale Watson. These are the ones keeping it real. I hear how poppy and auto-tuned all the stuff is these days. It’s so over produced, not even close to being real. Thank God for Internet radio,” he says.

All sold-out shows aside, there’s still an injustice plaguing Hank. His grandfather isn’t honored in the Grand Ole Opry, but they hang photos of him and even have an impersonator greeting guests as they arrive. So, Hank wrote a song, appropriately titled “The Grand Ole Opry Ain’t So Grand Anymore.”

“Their argument as to why they won’t reinstate Hank Senior is because he is dead. They are trying to use that as a loophole, and if that’s the case they need to do something else and show some respect. When you walk around Nashville, he’s everywhere. So, right now I’m just callin’ them out and talking some shit,” shares Hank.

Rebel Within releases May 25. Hank III will perform March 26 at the Roxy. For more information, visit hank3.com.