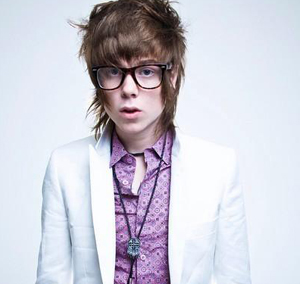 You may know that 18-year-old Christofer Drew performs under the stage name Never Shout Never and that the up-and-comer took last year’s “Breaking Woodie” award for breakthrough artist of the year in MTVu’s Woodie Awards competition. But did you know that the natty Drew also was voted “Best Dressed” during the live blogging for the event?

Drew will perform songs from the latest Never Shout Never effort, What is Love?, and no doubt wear something stunning when he appears March 30 at the House of Blues Sunset Strip.

Aspiring songwriters and performers already know that Akon’s HITLAB is the place to go on the Web to test out the hit potential of a new song. Now the site has teamed with the non-profit International Music Software Trade Association (IMSTA) to launch a song competition where the winner has a chance to sign a recording contract with a major label.

The winner also gets to perform live before Akon and other music industry heavyweights at this summer’s HITLAB Showcase. The competition ends May 31; find details on how to upload an entry at imsta.org.

There’s new music coming too; Mercury is about to release Nobody’s Daughter, the first Hole record since 1998’s Celebrity Skin. Nobody’s Daughter drops on April 27, but the album’s first single, “Skinny Little Bitch,” is available digitally now. Hole will be touring to support the album but dates have not yet been announced.

Cypress Hill was the first act to be signed by Snoop Dogg to the revived Priority Records, and Rise Up, dropping on April 6, is the first new product from the imprint.

Nuclear Blast Records has released a “deluxe tour edition” of Testament’s comeback record, The Formation of Damnation. The package features the original CD wrapped in a flip-cover slipcase that holds a second disc: an enhanced CD featuring live (audio and video) versions of “The New Order,” “Practice What You Preach” and “Souls of Black” that were recorded at Alcatraz Penitentiary in 2008 for MTV’s 52 Bands series.

Also included is the “More Than Meets the Eye” music video. Testament is currently on tour with Megadeth and Exodus, and they’ll be playing the Hollywood Palladium on March 31.

The Nadas Open Their Almanac

Playboy Magazine has proclaimed the Des Moines, Iowa-based folk rock band the Nadas the “Best College Band You’ve Never Heard Of,” and now you have a couple of opportunities to remedy that situation. The band spent all of 2009 recording and releasing one song a month, and those 12 tunes have just been compiled for the new album Almanac, the group’s seventh overall.

The long-running band actually started 16 years ago as a way for members to pass the time between college classes, and there’s been no looking back ever since. You can pass a little time with the Nadas on March 25 when the band brings their show to the Mint.

Once dubbed the "British Pixies,” English band the Wedding Present is celebrating the 21st anniversary of the release of their beloved Bizarro album with a tour that features the album being played live in its entirety. Hear “Brassneck,” “Kennedy” and everything else from Bizarro when David Gedge brings his band to the Troubadour on April 2.