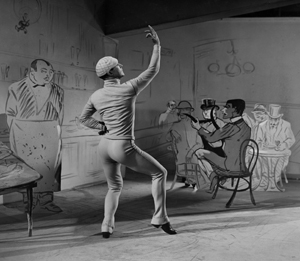 Gene Kelly in An American in Paris
(Credit: Handout/MCT)

A couple of months ago, the ever-popular and always entertaining sketch comedy show “Saturday Night Live” was hosted by Joseph Gordon-Levitt of (500) Days of Summer fame. As an avid “SNL” viewer, I stayed up just to see what he could bring. Actually, I might have watched it on Hulu the next day.

Regardless, Gordon-Levitt did something very different for his opening monologue. He didn’t just crack joke after joke about his love life in a well-composed ballad like Taylor Swift did earlier this year. He didn’t make fun of the wild rumors that he had breast implants (Britney Spears, anyone?).

No, the serious actor did something just as funny and more admirable. He took on one of America’s best and most well loved movies, a film that made dancing an acceptable art form for Hollywood once again. He parodied a scene from Singin’ in the Rain (1952), and he did one heck of a good job with it.

Which begs the question: Why has it taken over 40 years for the musical to make a comeback? You know what I mean – lately every movie seems to be either about superheroes, a sequel or a musical. I’m not complaining, but the resurgence of this genre forces the viewer to look back at the original movers, shakers and singers in remembrance and admiration for what they brought to film.

In my opinion, the father of the modern musical is Gene Kelly. He was born in August of 1912 and has starred in, directed and produced over 20 beloved musicals like Cover Girl (1944), An American in Paris (1951) and Singin’ in the Rain (1952). If you don’t know Gene Kelly, it’s time to meet the master of dance who nearly single-handedly introduced ballet into American homes as an acceptable and commercialized form of dance.

Brought to you by the American Cinematheque and hosted by the Aero Theatre, Singin’ in the Frame: A Gene Kelly Retrospective features four consecutive days of double features with an emphasis on, you guessed it, Gene Kelly and his musicals that enchanted audiences for an entire decade.

On Thursday, March 25, The Pirate (1948) and Brigadoon (1954) will be screened. The Pirate stars Kelly as a circus clown pining for a demure maiden (Judy Garland) who thinks he’s actually a pirate. In Brigadoon, Kelly discovers a magical village in this adaptation of Lerner and Loewe’s Broadway hit.

Friday, March 26, sees An American in Paris, the 1951 Oscar Best Picture winner featuring irresistible Kelly as a struggling painter in Paris, caught between the romantic aspirations of a wealthy patron (Nina Foch) and his true love (Leslie Caron). Right after, The Young Girls of Rochefort (Les Demoiselles de Rochefort) (1967) will be shown in its original format. The film is a near literal love letter to American musicals and romance in general. Catch Gene Kelly in some of the most memorable moments in musical history.

Spend your Saturday, March 27, at the theater because Singin’ in the Rain (1952) will be screened as the first part of this double feature. It was co-directed by Kelly, who also stars as silent movie idol Don Lockwood. With the advent of ‘talkies’ or movies made with sound, his character’s career is jeopardized until he finds the lovely Debbie Reynolds to star opposite of him. If there is one Kelly movie to see, it’s this classic, which is as funny today as it was back in 1952.

Summerstock (1950) is the second Saturday screening. Kelly stars along Judy Garland again in this film all about bringing the fever of the entertainment industry to a small farm.

Finally, On the Town and Anchors Aweigh close the double feature marathons on Sunday, March 28. On the Town (1949) sees Kelly, Frank Sinatra and Jules Munshin as three sailors on leave in New York. They find romance and dance across the town on their big day off. You know Anchors Aweigh (1945) as the film in which Kelly dances with Jerry the Mouse in a combination of live-action and animation. This film is another example of Kelly’s pristine choreography.

After a pretty hefty St. Patrick’s Day week and spring break in Cabo, relax and let Kelly dance away your cares for you.