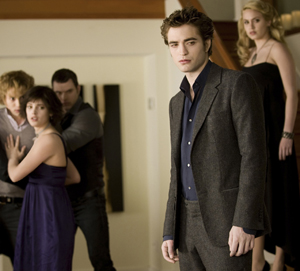 Vampires. There was a time when vampires fascinated me. You know, back before vampirism was reduced to being an excuse to get uptight chicks to drop their panties. The concept of vampires is as synonymous with blood and gore as it is with its ingrained themes of seduction and temptation.

Vampires are the very embodiment of seduction and temptation. They tempt and seduce with their promise of immortality, their debauchery, indulgent lifestyle and all around coolness.

Not to mention the fact that a vampire’s method of killing and/or turning a person is innately sexual in its design. A vampire grabs you, plunges a phallic object into you (in a vamp’s case, his teeth) and roughly drains you of your strength (blood). I don’t know about you, but that sounds a lot like me in the bedroom.

So in honor of the vampire genre, I’ve listed my top five favorite vampire films. What I look for in a vampire film is how the filmmakers put a spin on the mythology. A vampire is just a creature, so it’s all about the story and how you tell it. Every vampire film needs a total complete badass character in it, whether he/she is a vampire or not.

This is not intended to be a “best of all time” list. These are just my personal favorites.

The Lost Boys (1987): Directed by Joel Schumacher and starring Kiefer Sutherland as the super badass leader of the vampires, The Lost Boys takes the vampire myth and asks: What if the group of bad kids whom your son was hanging out with were vampires? Long before Twilight, these were the teenage vampires who were kicking ass and taking names.

From Dusk Till Dawn (1996): Whenever I make a “best of” list, Quentin Tarantino usually finds his way on there even if he doesn’t belong on it. But on this list he does, with his script for, and his hilarious performance in, From Dusk Till Dawn. Directed by his buddy Robert Rodriguez, the film stars George Clooney and Tarantino as two fugitive brothers who kidnap a family (played Harvey Keitel, Juliette Lewis and Ernest Liu), hijack their RV and escape over the border into Mexico. Once over the border, they go to a nearby bar that happens to be a vampire hive, and all hell breaks loose when the vamps try to feast on them. The badass in this movie is definitely George Clooney, delivering what is most definitely the most badass performance of his career, courtesy of Tarantino.

Bram Stoker’s Dracula (1992): Francis Ford Coppola was quoted as saying that the reason he named his classic gangster film Mario Puzo’s The Godfather was because he wanted to adapt the book as genuinely as possible instead of conveniently changing everything. The same is true for his adaptation of the most infamous vampire legend of all time. The original Dracula starring Bela Lugosi was great, but the story drastically departed from Stoker’s original text. Starring Gary Oldman in the title role, Coppola’s vampire epic kicks the ass of any other film about Dracula. Oldman gets two scoops of sugary badass for his performance.

Blade (1998): In this feature adaptation of the Marvel comic book of the same name, the film stars Wesley Snipes as Blade, the ultimate vampire hunter. Part human, part vampire, Blade has all the strengths and abilities of the vampires but isn’t weakened by sunlight like they are, earning him the nickname “the daywalker.” Directed by Stephen Norrington, the film follows Blade as he hunts down and kills vampires like cockroaches. The only thing more badass than Blade is his super-duper badass vampire killing weaponry.

Interview with the Vampire (1994): By far my most favorite vampire film of all time is Interview with the Vampire, directed by Neil Jordan and written by Anne Rice, who adapted her own book. The film tells the story of Louis played by Brad Pitt, a man who is tempted into vampirism by Lestat, the most badass vampire of them all. After being seduced into the life, Louis struggles with the reality that in order to survive, he must kill innocent people every day for food, a weakness that contrasts heavily with that of Lestat, whose thirst for killing matches his own thirst for blood. Tom Cruise’s performance as Lestat is, for me, the best portrayal of a vampire, ever. Period.