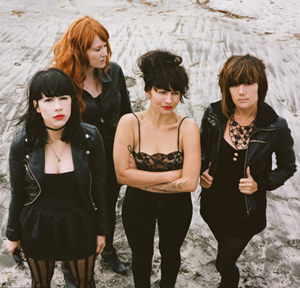 Dum Dum Girls release their debut, I Will Be, March 30.
(Credit: Lauren Dukoff)

Earlier this month meant the long, long overdue release of A Sufi and a Killer (Warp), the debut from Flying Lotus collaborator Gonjasufi, originally set for last year but allegedly delayed due to a post-signing period of rest.

Delayed even further was an eponymous release from the Bundles (K), a collaboration among kooky comic book artist/songwriter Jeffrey Lewis, his brother Jack, Anders Griffin and ex-Moldy Peach Kimya Dawson, which began as a side project eight years ago and was recorded officially over the span of a few days in 2009. Tour dates are, at press time, only applicable to Europe this spring.

March 16 meant the first of two 7-inch records featuring Ty Segall to be released this spring; his “Caesar” 7-inch was put out by garage rock label Goner on this day, while April 6 will see a four-way split among Segall, CoCoComa, White Wires and Charlie & the Moonhearts (Trouble in Mind).

King Khan, ever the multi-tasker, has released a 7-inch in collaboration as well, “The Fiery Tears of St. Laurent” (Sub Pop) with Pat Meteor. Rounding out a day heavy on garage rock, also on Goner, is Rush to Relax by Eddy Current Suppression Ring, a punk group out of Melbourne.

Swedish party band Love is All released Two Thousand and Ten Injuries on Polyvinyl, March 23. They’ll also be at the Echo on April 18, and are not (not!) to be missed.

March 23 was also the first of two spring dates seeing fresh, collector-friendly releases by Swiss post-punk girl group LiLiPUT (Kleenex, prior to 1980). Live Recordings, TV-Clips and Roadmovie (Kill Rock Stars) is a CD/DVD set featuring previously unreleased tracks, video footage and super-8 tour footage from 1982; the CD boasts a 24-track listing comprised of two concerts, Kleenex live in Biel in 1979, and LiLiPUT live in Zurich in 1983. This release precedes a four-LP box set (Kill Rock Stars) by the band, set for a May 18 release.

Also being dusted off is the 1971 record What a Beautiful Place, by then-20-year old British singer Catherine Howe; originally released by Reflection Records and then left to rest in obscurity after the label’s demise, the record is now being re-released by the Numero Group, a year after her most recent, Lucy Snowe, and would not be out of place in a collection alongside Nick Drake, Laura Nyro and Vashti Bunyan. A peaceful contrast to a long-awaited – supposing no one’s given up! – sophomore record from psych-rockers Serena-Maneesh, whose S-M 2: Abyss in B Minor (4AD) released March 23 as well.

March 30 brings the Sub Pop debut from Dum Dum Girls, I Will Be. This new band of Kristin Gundred, former drummer and vocalist for Grand Ole Party, is somewhat of a hybrid of the Phil Spector fandom that could be found not long ago with Glasvegas and the lo-fi ’90s influence in the Pains of Being Pure at Heart. But it’s a huge turnaround from her work with Grand Ole Party.

On April 6, post-rockers Red Sparowes, another group out of Los Angeles, release their new record, The Fear is Excrutiating, but Therein Lies the Answer (Sargent House) – rather appropriate for the genre, no? See Explosions in the Sky. Head to the Echoplex on May 8 to see them play alongside Fang Island.

Every season appears to see a new release of some sort from Scottish noise-bastards the Twilight Sad; they’re quite fantastic, however, so it’s with no hesitation that I recommend their dreary “The Room” 7-inch (FatCat), a new single off last year’s Forget the Night Ahead, out April 12 (rescheduled from March 29). Sadly, bass player Craig Orzel left the group last month (perhaps to pursue electronic side project Orzelda?), but the Twilight Sad remain set to support Mono on tour this spring, stopping at the El Rey on May 7.

Look to April 13 for Steal Your Face (Thrill Jockey), the newest from Black Eyes spinoff (and frequenters of the Smell) Mi Ami; one week later, to Neu! knockoff Caribou, whose Swim (Merge) comes out the same day as a new release from the rather aged former 13th Floor Elevator Roky Erickson (True Love Cast Out All Evil, Anti-). And of course, worth a mention is a split 7-inch from the Thermals and the Cribs (Kill Rock Stars), which should, if all character is intact, be at once poppy and punky and the tiniest bit sloppy.?April 27 brings – finally! – the first release in several years by Frog Eyes, fronted by a rather Tigger-esque Carey Mercer. Paul’s Tomb: A Triumph is the band’s debut for Dead Oceans.

May 4, expect I Learned the Hard Way (Daptone), the newest from bloody good soul singer Sharon Jones and her brass band the Dap Kings. Also keep a lookout for Cosmogramma (Warp), from Flying Lotus; the record briefly features Thom Yorke and, rather conveniently, Flying Lotus will be opening for Yorke’s supergroup, Atoms for Peace, this spring. No Los Angeles dates as of press time, but they will be stopping at the Santa Barbara Bowl on April 17.

Rumored for spring release are new records from former Gris Gris/Mirrors frontman and guitar virtuoso Greg Ashley, whose third solo LP will likely be out on Birdman, and the Psychic Paramount, whose excellent and deafening Gamelan into the Mink Supernatural is now five years into the past, and whose sophomore record II has been in the works since 2008 and delayed from last year by No Quarter Records. Live appearances are respectively scheduled only in San Francisco and Europe, sadly.