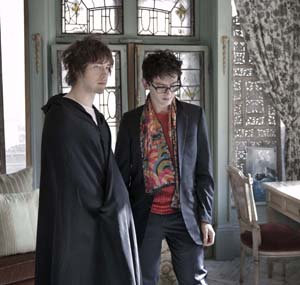 Arguably the most charming pianist listed here (sorry, Thom), the English jazz-pop singer’s soulful crooning can emote far beyond his 30 years of age. Able to modernize a genre that would sound trite and dusty in the hands of any lesser musician, Cullum might be the only musician to successfully have jazz-ified both Radiohead and Rihanna tracks for his albums. That, people, is real talent.

The most charming male-female duo on this list, vocalist Zooey Deschanel and vocalist/guitarist M. Ward aren’t so much traditional charming as they are … quirky charming. Like, charming the way Wes Anderson films and Feist music videos are charming. Which is the good kind of charming, just so we’re clear.

All too often we talk about girl-fronted rock bands in the weekly show picks, kicking and jumping around on stage as they belt out power ballads, but maybe it’s time we checked out some other options. More of the indie variety than the aforementioned girl-fronted bands, the Canadian foursome is just as infectiously catchy, but you don’t have to deal with 16-year-olds with attitudes at their shows. What more could you ask for?

While brushing up on Jay-Z’s goings-on to write this section, I got distracted by the video for “On to the Next One.” And I can’t … stop … watching. It may or may not have stolen my soul like Japanese horror film adaptations, but it’s just … so good … almost … hypnotizing …

These dudes were my favorite new band discovery of 2009, which is saying a lot in a very not ironic way. Any melodic rock band who can open for Paramore while sounding grown up, and dare I say, even artsy, will forever have my respect. Their touring mates for this outing, however, well, I won’t ruin the surprise.

Want to know what the soundtrack to the post-apocalyptic future sounds like and looks like on stage? These are your dudes.

Like, half of the artists mentioned elsewhere in this guide are playing Coachella this year, so if you really want to economize on your time, take the weekend off and get the abridged editions of these bands’ sets. Although, let’s be real, spending three days straight with the likes of the Julian Casablancas, Coheed and Cambria, Dead Weather, Faith No More, Fever Ray, Grizzly Bear, Hockey, Major Lazer, MGMT, Miike Snow, Muse, P.O.S., Ra Ra Riot, Steel Train and Frank Turner is totally time well spent.

Come on, it’s Thom Yorke. As if you could even try to be disappointed at a show like this.

I know it’s only been a few months since we saw the Thrice boys last, and an even shorter time since frontman Dustin Kensrue played his solo acoustic shows out here, but it’s still far too long to go without a Thrice show for sustenance. The Irvine-based post-hardcore foursome can get their stripped-down acoustic on as quickly as they get their art-prog on and sound completely at home at both ends of the spectrum.

Ah, my favorite group of Canadian rockers is finally hitting the road again. I know calling them as much really isn’t saying a whole lot, but they’re actually really good, despite their country of origin. No, seriously. For as much thrashing and shredding as they can bring to a stage, you’d swear they were really Orange County-bred.

Wait … Drake’s Canadian too? Since when? For real? I promise, this wasn’t an intentional theme. Not to suggest that Drake isn’t awesome, it just boggles the mind to explain how one becomes “street” while living in Ontario. But what do I know? Maybe one really can face hard times and grow up on the wrong side of the tracks up there – something having to do with the universal health care system, or whatever.

Point being, regardless of where Drake picked up his street cred, the dude performs with a whole lot of stage cred. Hopefully, the Thank Me Later album will actually see the light of day before this show happens, but hey, no promises.