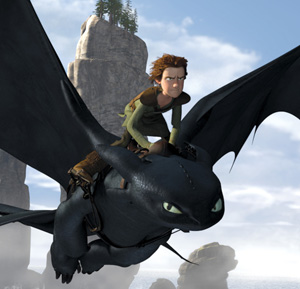 An entire Scandinavian village has been under attack by flying dragons – and these dragons do more than puff or breathe fire. They are pillaging the villagers for their livestock and food supply. For about 300 years, the citizens of a mythical Scandinavian tribe located on Berk Island is almost entirely occupied by dragon fighters because fire-breathing monsters viciously attack the residents regularly.

Leave it to Hiccup (Jay Baruchel), the skinny, klutzy, lanky, accident-prone son of tribal chief Stoick the Vast (Gerard Butler) to capture the most dangerous of dragons, name it Toothless and uncover a stunning truth while creating the unlikeliest of alliances to prove everyone wrong about the true nature of the otherwise frightening creatures.

An intriguing storyline, what ultimately stand out in How to Train Your Dragon are its mesmerizing visuals, brisk storytelling pace, solid thematic elements and adorable moments that will make audiences melt with affection.

How to Train Your Dragon releases in theaters March 26.