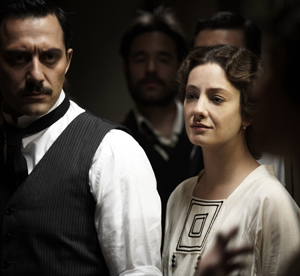 Marco Bellocchio’s powerhouse film Vincere sheds light on a little known subplot in the Benito Mussolini saga: that of his betrayed first wife and first-born son.

Giovanna Mezzogiorno portrays Ida Dalser, who wed the young Mussolini (Filippo Timi) when he was still an unknown, a rising star on the political scene. Having been booted from the Socialist Party due to his interventionist stance, the devoted Dalser sold everything she owned to fund the newspaper that would launch him into the political spotlight, Il Popolo d’Italia.

Dalser would give birth to Il Duce’s son, Benito Albino Mussolini, who was officially recognized by the future leader as his offspring. Mussolini would later have the records altered to disprove Dalser’s claims.

Little did Dalser know of Mussolini’s other life and his first lover, Rachele Guidi, with whom he already had a daughter. When Dalser becomes aware of his subsequent marriage, a firestorm of pride and indignation is aroused in her, which leads Mussolini to silence her first under constant surveillance and then, when she cannot be tamed, she is committed to an insane asylum, never to see her young son or her freedom again.

Her son, abducted, raised among strangers and stripped of his rightful name is eventually confined to an asylum himself. Both are tortured and, ultimately, perish in captivity.

The film itself is as brooding and dark as the plotline, rife with stylized visuals and archival footage, which mirror Mussolini’s own exploitation of the visual medium to arouse the support of his people.

Vincere’s major flaw lies in the stark visual contrast between Timi and the elder Duce shown in the newsreels. That they are one and the same simply isn’t believable. It’s hard to say if the use of the newsreels alone to portray Mussolini in the later portion of the film is meant to highlight the fact that this is Dalser’s only contact with the dictator, or if Bellocchio simply grew fatigued with the task of all the historical recreation.

These flaws aside, Vincere is a fast-paced and eye-opening political thriller that doesn’t let up for a moment. Mezzogiorno is mesmerizing, and Timi, although perhaps ill cast, nonetheless provides a remarkable performance as well in two roles, the elder Mussolini and his son, Benito Albino.