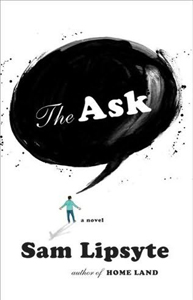 The Ask, the new novel by Sam Lipsyte (Home Land) is simultaneously one of the most insightful and funny books to dissect modern life in some time. At the center of it is Milo Burke, a failed artist who now works attempting to land donations for a mediocre New York university — that is, until he vents his frustration on a spoiled rich girl and is fired.

Milo struggles with his crumbling marriage, raising his son and spiritual ennui. Then suddenly the university needs him back when an old college friend turned Internet millionaire decides he might want to give a donation.

Chock full of nuggets of wisdom, observations on modern life and surprising, laugh-out-loud lines, it will have you immediately seeking out Lipsyte’s entire oeuvre. It pulls off the high-wire act of being heartbreaking and hilarious at the same time.

The Ask is currently available.