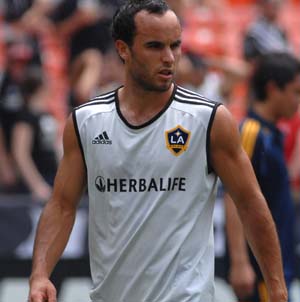 The Los Angeles Galaxy squad begins its 2010 season hosting the New England Revolution this Saturday at the Home Depot Center at 8 p.m. Striker Landon Donovan has everyone’s eyes now, especially since midfielder David Beckham is out for the following six months due to a torn Achilles’ tendon.

Donovan recently arrived from England since he was on loan in Everton at the English Premier League, where he shined every time he stepped onto the field. Arguably the most talented American soccer athlete, Donovan is the axiomatic leader of the Galaxy.

Nevertheless, the Galaxy is a team full of young and experienced players who make them the team to beat in the Western Conference. The Galaxy are looking to defend their 2009 Conference championship and earn a ticket to the MLS Cup yet again.

On the roster for Los Angeles are defensive studs Donovan Ricketts (goalkeeper), Omar Gonzalez and Sean Franklin. Gonzalez and Franklin received Rookie of the Year honors for the last two seasons, respectively. Gregg Berhalter’s veteran play and experience in the backfield is a big plus, too. Defender A.J. DeLaGarza is perhaps the player who will make the biggest impact for the group this coming season.

With the absence of Beckham, either veteran Eddie Lewis or Chris Klein has to step up to solidify the midfield for the unit. Offensively, head coach Bruce Arena has a lot to choose from. Arena can count on Edson Buddle, Alecko Eskandarian, Jovan Kirovski and Donovan.

Donovan is the evident leader on the pitch, but Arena is the mind behind Galaxy’s strategic planning. During the off-season, Arena was crucial in signing three young, talented individuals of Brazilian descent in Juninho (midfielder), Leonardo (defender) and Alex (defender).