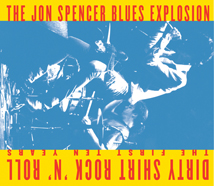 It is going to be a bonanza year for Jon Spencer fans. Majordomo is reissuing a plethora of Spencer’s Blues Explosion albums. The assault starts with Dirty Shirt Rock’n’Roll: The First Ten Years, a primer on the scuzz-blues band who deconstructed early rock ’n’ roll, raw post-blues, funked up punk and more into a self-referential maelstrom that was half put-on and part blow-out.

This single-disc, 22-track compendium cracks open the vaults to combine fan faves such as “Bellbottoms” and “Afro” with obscure oddities from remix efforts, import singles and collaborations with other artists. The 70-minute collection proves the Blues Explosion were one of the undervalued groups of the ’90s who could put soul into punk, took fuzz to new heights and lows and gave new meaning to getting down and dirty, particularly through pieces like “History of Sex” and “Lap Dance.” Mike Edison’s energetic liner notes fill in all the details listeners need to know.