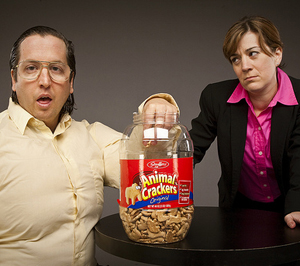 What do animal crackers, a buttload of pirates and hippies have to do with “The Price Is Right?” According to the “Groundlings Showcase Showdown” playbill, “Absolutely nothing.” But who cares, it’s an hour and a half of the Groundlings, so what could go wrong?

Their latest main company show produced by Mikey Day is about a 70/30 split of hilarious, laugh-out-loud ridiculousness and jokes that are just slightly better than OK. Highlights include “Not Gonna Work,” where Lisa Schurga really shined as the neurotic first date who sabotages a relationship before it even has a chance to begin and Jeremy Rowley in “Economic Meltdown,” as he tries to explain what will happen when the economy finally collapses.

There’s also the slapstick comedy of “Break Room” that is both endearing and roll-on-the floor funny and “Like a Flash” that puts Jim Cashman in probably the most awkward situation ever (And no, I will not elaborate, it’ll give it away!). “First Night” reprises the theme of awkward dates with what is quite possibly the best sex mixtape ever for prom night, and “America’s Next Best Dance Crew” showcases a dance routine that could easily land the men a spot on the real show set to the absolutely most amazing remix of Dolly Parton’s “Nine to Five” ever. E-V-E-R.

On the other hand, while the blue-collar lifestyle portrayed in “Piss and Vinegar” might be part of the Groundling’s signature style, the sketch itself is predictable despite having some rather impressive “choreography.” “The Good Wife” spoof, “Apology,” is also a little on the over-the-top side and resorted to bathroom humor instead of real comedy. Then there is “Calendar Guys,” which is somewhere between awkwardly hilarious and just plain silly, but Mitch Silpa and Ryan Gaul certainly do have good comedic timing with each other.

On the whole, the show is totally worth seeing, despite a few not-quite-great sketches. Those get balanced out by “The Price Is Right” décor in the lobby, the (mostly) fantastically ’80s music between each sketch and the free Plinko board in each program.