Clash of the Titans: Sam Worthington saves the day … again. 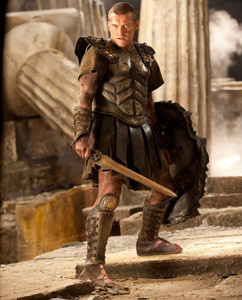 Sam Worthington as Perseus in Clash of the Titans
(Credit: Jay Maidment)

When Sam Worthington bustles into the Four Seasons Hotel to promote his new film, Clash of the Titans, you can’t help but stop and stare. Smaller than one might expect, dressed casually in jeans and an Iron Maiden T-shirt, gnawing on a croissant, it isn’t just that Worthington starred in one of the highest-grossing films of all time that earns the double take. Charming, handsome and filled with firecracker energy, you can’t seem to rip your eyes away, waiting for what might tumble out of his mouth next, be it a string of curse words or a poem by Rudyard Kipling.

In his new film, Worthington stars as Perseus, the half-man/half-god son of Zeus (Liam Neeson), on a mission to save the world from Hades (Ralph Fiennes), the vengeful god of the underworld. Following similar savior roles in Terminator Salvation and Avatar, one might wonder if Worthington has something of a God complex, but the actor says he just wants to make movies he’d want to see, so don’t expect to him to pop up in a little art-house flick any time soon.

“To be honest, I want to do big movies,” Worthington shrugs. “If I’m going to do films and invest six months of my life, it better be something worthwhile.”

But he’s quick to point out that he’s not after a paycheck or marquee space, his taste simply leans toward action adventures.

“I’m not in this profession to be famous,” he says, but, unlike most actors, you believe him. “That’s a by-product of the size and scope of the movies I do. You want to be famous, go on ‘Big Brother.’ This job is too hard, and it requires a lot of skill and a lot of passion. So if I want to go and see this movie myself, it’s even better to be a part of it and we get to give the audience their $16 bucks worth.”

Even though the majority of the roles he has played recently have been in what he calls “Saturday popcorn flicks,” Worthington still approaches each role seriously, allowing the character to seep into the fabric of his skin for a bit.

“I remember when I was doing the Terminator press,” Worthington chuckles, “It all got quoted as ‘Sam is an angry young man, he’s all jaded.’ That’s because I was playing Perseus, killing shit every day! It goes into your being.”

When he’s not in character or traipsing the globe promoting his next blockbuster, Worthington keeps his existence monastically simple, living out of two suitcases. He says that one day, on the cusp of 30, he woke up, looked in the mirror and didn’t like what he saw … so he sold the mirror. He sold everything, in fact. He calls it control-alt-delete, like on a computer.

“I thought, ‘Why not reboot yourself?’ Because you can get defined by what you own. I had a great career in Australia. Don’t get me wrong. I worked for 10 years, solidly. I just didn’t like the position I was in, so I sold everything to my friends, had an auction at my house, had a gavel and everything. You know, ‘Four bucks for the TV.’ Even sold the gavel in the end. And then it’s that Rudyard Kipling poem, ‘If you can risk it all on the pitch and toss and lose and tell no one about your loss, then you, sir, are a man.’ I thought that poem was quite inspiring.”

After the auction, left with what he still calls his only possessions, one bag of books and one bag of clothes, Worthington says he got in his car and drove, thinking, “Something’s got to give. Something’s got to crack. Little did I know there’d be a man who’d come along and change my life.”

“But also, when you’ve got nothing to lose, you’ve got everything to gain and that was the key,” he continues. “Then if I did audition for Avatar and I didn’t get it, well, I put myself in the position where I had nothing, so it didn’t bother me.”

When asked what it was that he saw that caused him to make such a drastic change, he smiles a wicked grin, gets a twinkle in his eye that makes you believe he just might be half-god and says, “That’s between me and the fucking mirror.”

Clash of the Titans releases in theaters April 2.

Interviews
James Bond producer: 007 ‘can be of any color’ but never a woman
613 views

Interviews
For Martin Scorsese, making ‘The Irishman’ was about ‘learning to die’
1,150 views