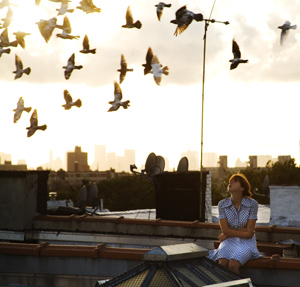 Zoe Kazan, the granddaughter of legendary director Elia Kazan, has been building a name and reputation for herself on Broadway and in small, memorable roles in films like Revolutionary Road, but her latest film, The Exploding Girl, is a triumph of delicacy.

Kazan stars as Ivy, a college student home in New York City for spring break. Dissecting the film’s plot is useless since little happens; Ivy talks on the phone with her increasingly distant boyfriend, she goes to a few parties, she visits a doctor to have her epilepsy monitored, she plays cards with her often absent mother and childhood friend Al (Mark Rendall). The explosions in The Exploding Girl are implied rather than literal, as turbulent emotions simmer and swell just below Ivy’s soft, beatific surface, all gulped back in tiny mouthfuls of pedestrian dialogue.

Directed and written by Bradley Rust Gray, the film began in the spring of 2006 when Kazan auditioned for a role she didn’t get.

“I felt kind of silly because I’d made him this very elaborate collage,” Kazan recalls, laughing at her own enthusiasm. “I just really responded to the film and the script so I’d gone the extra length. Afterward I was like, ‘Why did I do that? It probably cost me the job because it was so weird.’ But actually it kind of stuck in [Brad’s] head.”

Two years later Gray set up a meeting with Kazan and asked her to take a walk with him.

While Gray was best known for films where he used non-actors playing characters that had been molded around them, Gray and Kazan set out to birth a new character together. They spent three or four months taking epic walks which lasted six to eight hours at a time in the cold New York winter.

“We talked about who we were, our childhoods and our love lives. Like getting to know a friend or a blind date,” she says.

Once Gray had a script, they shot the film around Manhattan in 18 days using long lenses to give the audience an almost unsettling feeling of voyeurism.

“Brad talks a lot about wanting to give the characters their privacy,” Kazan says. “You feel like you’re watching this girl go about her daily life. A lot of the time I wouldn’t know where the camera was or if it was rolling. Sometimes Brad would run up, slip an object into my hand and [that’s how] I’d know that we were filming because he’d just put my prop in my hand,” she laughs.

While the film’s hyper-naturalism might imply that it was shot guerilla-style, Kazan insists that the only filming done without a permit were shots stolen on the subway for budgetary reasons.

“We put the camera in a duffle bag and cut a hole for the lens and the view finder. It was really fun. I felt like a fugitive. But I’m the world’s worst criminal. At some point a cop came on the subway and I freaked out and got off at the same stop the cop came in on which, of course, piqued his curiosity and he put a beat out on his walkie, like, ‘We’ve got suspicious activity on this platform.’”

Though she might make a terrible criminal, Kazan is a stellar actress, and with a flourishing career come certain perks. After less than a dozen films, she’s already found romance with Zac Efron and been topless in front of Leonardo DiCaprio.

So I had to ask, if Tiger Beat put a gun to her head and said she had to choose just one of her previous co-stars to romance, who would she choose?

“Between those guys?” she chuckles. “Oh, I always go for older men.”