The Last Song: Focusing on the Miley Cyrus Factor 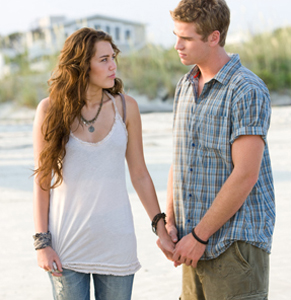 The Last Song could easily be called “The Swan Song” because it marks the end of a major chapter in Miley Cyrus’ life and career. When the young superstar sweeps into the ballroom of Santa Monica’s Casa del Mar on a sunny March day, you can’t help but notice the light glinting off the water outside and how reminiscent it is of the paparazzi flashbulbs that have followed the 17-year-old since she became one of the biggest stars on Disney’s roster. With long brown hair trailing to her waist, eyes rimmed with liner and a lithe body encased in the teenage version of rock star professionalism, it’s unmistakable that Cyrus is ready to grow up and move beyond her role as Hannah Montana.

In her new film, Cyrus plays Ronnie Miller, a piano prodigy who has rejected her talents following the painful divorce of her mother and father (Kelly Preston and Greg Kinnear). Sent with her brother (the strikingly talented Bobby Coleman) to reconnect with their father over the summer in a small Southern beach town, she meets and falls for the local volleyball god (Liam Hemsworth, who is distractingly beautiful). The film, penned by king of the weepy romance, Nicholas Sparks, was developed and written specifically for Cyrus as a vehicle to introduce her to older audiences.

“Disney had a two movie [deal] with Miley,” Sparks explains. “Of course, she was going to do Hannah Montana for the one, and she said she might want to do something like A Walk to Remember.”

Approached by the studio, Sparks spent the next few months writing a novel expressly to be turned into a screenplay for Cyrus.

“I spoke to Miley, got some input on some things that she wanted specifically and didn’t want specifically in the film,” he says.

Cyrus says those conversations with the writer were what made jumping into the project less daunting. She wanted Ronnie to be a character, but not one so removed from her that it was unrecognizable.

“It made it easier to go into something new, a film that wasn’t based on Hannah Montana [and] wasn’t such a comfort zone, to make it a little more like me,” she says.

Though familiar in some ways, her love of music and close relationship with her family, for example, Ronnie is very different from both Cyrus and the character she’s best known for. Bitter, sullen and angry, the actress relished the chance to dig into a more dramatic role.

“I got to drop the guard a little bit, got to throw all the fits I’ve wanted to in the past year,” she laughs.

But she also had to learn to modulate those emotions, which are so often unseen on the Disney Channel.

“The biggest thing I learned [was] to go deeper,” she says.

When asked if this film could be a last song for Hannah Montana, Cyrus seems both wistful and eager. As the film arrives in theaters, the Disney Channel is airing the last episodes of season three, and the cast is finishing production on season four, the show’s final season.

“As a new chapter is beginning, my life for the last five years is ending,” Cyrus sighs. “It’s interesting to be leaving my security blanket behind, but also it’s exciting. It’s been such a huge deal in so many kids’ lives [and] an amazing journey.”

Prodded further to whether there might be another Hannah Montana movie, if not another season of the show, Cyrus is resolute.

“No!” she insists, shaking her head vigorously. “Hannah Montana [and] the wig is out. As soon as that last episode [is filmed], one [wig] will be in a museum and one will be burned or something because I can’t put it on again. It’s just too much.”

Like any teenager, Cyrus has reached the edge of the nest and is ready to tumble out and test her wings.

“I’ve gone the last five years of ‘Hannah Montana’ with everyone telling me what to do and now it’s kind of up to me,” she smiles. “I have to be careful to not lose the Miley Cyrus factor. I still want people to know who I am, I just want to extend my audience, continue to do what I love, but give myself new challenges and not just be the same person over and over.”