An Official State of Panic: MxPx Survives the Disasters of the Music Industry 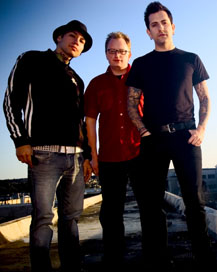 From major natural disasters to terrorist attacks, to rising criminal activity, new diseases and war, there are plenty of reasons to live in fear, and not enough reasons to live without it. MxPx can be placed in the latter category, recognizing society’s mass fear frenzy, yet choosing to play to a different tune – hence the title of their newest album release, Panic.

"You can’t worry that you’ll be abducted or blown up, or that a plane is going to crash into your house," says guitarist Tom Wisniewski. "You’ve got to have fun. To live life and make sure you have a good time, even if it does happen."

It’s that kind of optimism that makes MxPx different from other punk bands that seem to capitalize on the angry rebel mentality often associated with the genre. Produced by Gavin MacKillop (Goo Goo Dolls, Sugarcult), Panic stands as an impressive piece of art coming from the Bremerton, Wash., three-piece punk rockers. Lead vocalist, bassist and chick magnet Mike Herrera, Wisniewski and drummer Yuri Ruley have managed to incorporate their original pop-punk rock ’n’ roll sound into songs that most any listener can relate to.

The first single, "Heard That Sound," is a catchy tribute to the comforting role music plays that’s already catching airplay on rock radio stations like KROQ and 91X. "The Darkest Places" confronts the need to face our fears: "You don’t want this/You can’t dismiss/Shine the light on the darkest places/You and I know we both have to face this now." Other songs such as "Young and Depressed" and "Cold Streets" portray our need to dwell in emotions, and the notion to move beyond them.

"People sit around and complain," notes Wisniewski. "But at the end of the day, if you’re not going to come up with any solution, what’s the point?"

It’s that kind of proactive thinking that has gotten the members of MxPx to this point in their musical careers. Thirteen years is a long stint for the typical punk band, especially with ever-changing trends in the music scene. With three record labels – Tooth and Nail, A&M, and currently Side One Dummy – six albums and a DVD, the boys of Magnified Plaid (their original band name, later shortened to MxPx) found themselves wanting more, prompting some serious self-evaluation.

"Something had to change," says Herrera. "We were either going to slowly die or do something extraordinary. [We had to] dig deeper than we ever had before."

Thankfully, MxPx chose to dig, dig and dig some more. The band’s songwriting has expanded from their personal experiences to the various struggles that many people go through. The guitar solos stand out smoothly, and their overall tempo has become more lively and upbeat. MxPx has transformed challenges of the past into newfound opportunities.

"With [A&M], we were on the same label as Eminem, so of course there was some attention taken away from us," explains Wisniewski. "[Side One Dummy] is a label that actually cares and is trying for us. It’s a lot more DIY – we’re involved in every single decision, and I think it’s way better for us."

MxPx’s venture to take over the world with its positive brand of punk includes a global tour following Panic’s release. The band is scheduled to perform on the entire Warped Tour, and then it’s off to Europe, Australia and Japan before returning home to the United States.

Believe Wisniewski when he declares, "It’s a new day for MxPx."

Panic will be available June 7. MxPx will be performing on the Warped Tour 2005 July 1 at Cal State Long Beach, July 3 at Seaside Park in Ventura and July 6 at Fairplex Park in Pomona. For more information, visit www.mxpx.com.