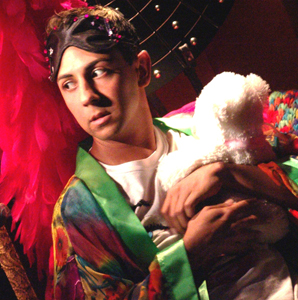 For the second time this year, Regent Releasing and Here Films release a trilogy of gay-themed movies. There was a time not too long ago when there weren’t six movies featuring lead gay characters on the big screen in a year, let alone in three months. Films like Brokeback Mountain and Milk were the increasing exceptions that proved the rule.

Dream Boy, an official selection of the Berlin International Film Festival, is based on the book of the same name. It’s a tale of two teenage boys who must keep their affair in the closet in their small town. Dream Boy is almost a Greek tragedy in the sense that Nathan Davies, the protagonist of the film, experiences one tragedy after another in his life. After he truly finds happiness, it is undone by yet another tragedy.

Just Say Love is based on the play of the same name. In the vein of Lars von Trier, the set is very minimalist, perhaps as an homage to its stage roots, or perhaps just to keep costs down. Once you (or at least me) get past that, the message of the movie pulls at your heartstrings. Mainstream society has a very cookie-cutter view of what a healthy relationship should look like. The problem is many of us don’t fit into that cookie-cutter view and have to find our own paths toward love and relationships.

Of the three films, the subtitled Manuela and Manuel is the most lighthearted. Manuela was born as Manuel, but is more comfortable in a life of drag. His friend Coca asks him to pose as her boyfriend and father of her unborn child when she visits her conservative parents whereupon a “Three’s Company” chain of misunderstandings ensue.