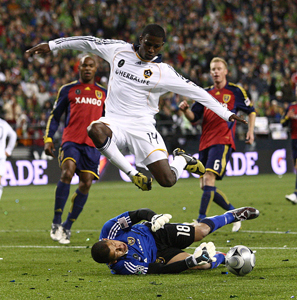 Certainly the best way for a squad to begin a campaign after having lost the Major League Soccer Cup is by winning its first affair of the year.

Edson Buddle was instrumental for the Los Angeles Galaxy since he headed the only score of the match to lift the group past the visiting New England Revolution in both teams’ MLS season opener at the Home Depot Center in front of 21,376 fans.

Striker Landon Donovan provided a sound free kick ball into the box in order for Buddle to fly and dive in for the six-yard header. Donovan recently arrived from a 10-week loan to Everton in the English Premier League. He is in great shape and seems more confident in his game more than ever before.

Buddle netted his first goal of the season and is looking to return to his 2008 form, when he accumulated a career-best 15 goals. Last year, injuries limited Buddle’s playing time, making him miss a significant portion of the season.

“I think this could be a good year for him,” coach Bruce Arena remarks. “He’s definitely over his injury problems.”

Revolution kept the game close but produced insufficient danger for Galaxy goalkeeper Donovan Ricketts. He collected one save in his first shutout of the season.

The Galaxy looked far superior, motivated and comfortable than New England did in the 90 minutes of play. Both Brazilians Juninho and Leonardo made their debut with starting roles.