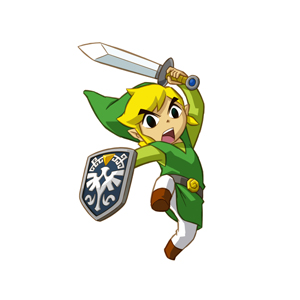 Toon Link from “The Legend of Zelda: Spirit Tracks”
(Credit: Courtesy of Nintendo)

If Nintendo is known for anything, it is their ability to mix innovation with the familiar. None of Nintendo’s trademark items – from the amazingly successful mixture of last-gen hardware and innovative controls that make up the Wii to the ever-evolving adventures of their Italian plumber mascot – could come close to being called obvious, safe gaming design. Yet, even their strangest decisions and inventions seem to have a quality that makes them feel right and even somehow comfortable. Well, excluding the Virtual Boy, of course.

Wherever Nintendo goes, though, it still remembers the faces that we have grown up with. The most obvious example of this is Mario, a figure who has endeared himself to generations of gamers and yet seems to constantly be growing, evolving and setting out on adventures that seem alien from anything he has done before. The line between reinventing classic characters and retaining their original charm is always tricky, and yet Nintendo seems to walk it with ease.

One classic character who has withstood the tests of time, technology and ever-changing gaming appetites is Link, the immortal hero of the “Legend of Zelda” franchise. Whether you met this elfish adventurer as a blocky 2D swordsman, an ocarina-playing 3D platformer or even as a darker hero with a wolfish side, Link’s world has offered both a dark struggle for the fate of the world and a charming world with memorable, often cute characters. Well, excluding the CD-i “Zelda” games, of course.

“The Legend of Zelda: Spirit Tracks” falls more onto the cute side, offering a new look into the world of Toon Link. For those unfamiliar with the cartoony doppelganger of the hero in the green hat, he made his debut in “The Legend of Zelda: The Wind Waker” and joined the fighters in “Super Smash Bros. Brawl.” This time, the cartoon crusader has traded his sea legs for one of the oddest choices – a conductor’s hat.

Like previous iterations of the series, this Link and Princess Zelda live in a new time period and are ultimately different people than previous incarnations. This does not stop Zelda from immediately recognizing Link as her personal protector. This proves to be a poor choice as Zelda finds her soul quickly separated from her body, but between her ability to possess walking suits of armor and Link’s sudden skill with swords, they head out to return everything to normal.

Admittedly, innovation works both for and against this title. The complete reliance on touch-screen gameplay is a bit off-putting and can make controlling our hero somewhat difficult, but every other aspect – from guiding the princess to plotting the train’s course – is intuitive and enjoyable. Public gamers do have to blow into the microphone, but it harkens back to fond “Zelda” musical memories.

If you want a safer bet, the core “Pokémon” series offers consistent action-RPG gameplay with that formulaic appeal and cute characters we have grown up on. Even if you have already caught, evolved and maxed out every “Pokémon” in the world, something about a new game in the franchise makes you want to throw on your red baseball cap and start hunting the little creatures all over again. While there is a new title slated for release later in the year, there is a unique quick fix to tide you over until then.

“Pokémon HeartGold” and “Pokémon SoulSilver” may be remakes of “Gold” and “Silver,” but they offer some nice new polish on the Johto region. This remake puts the bottom touch screen to good use, offering a quick menu system and a battle system that is more streamlined for quick combat. The games also go out of their way to crow about the ability to connect wirelessly.

Perhaps the strangest and yet most ingenious addition to these titles, however, is the Pokéwalkers. This little LCD pokéballs look like the old virtual pets, but they are actually clever step counters that can transfer “Pokémon” to and from the DS. Once you have your monster in the tiny portable device, you can carry it around as you walk to class.

The counter tracks how many steps you take and converts them into Watts, which can then be used to search for Pokémon and items on the device. When you are done, you can put the “Pokémon” back into your DS, leveling up the “Pokémon” in the process. It is a gimmick, but a clever one that inspires gamers to take a walk while reducing the tedium of leveling.