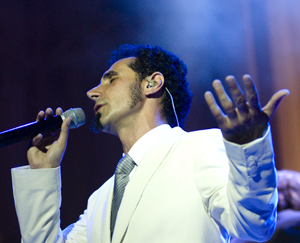 About a year ago, Serj Tankian performed the music from his Elect the Dead solo album with the Auckland Philharmonia Orchestra in New Zealand, and now Warner Bros. has released a recording of that show as a special CD/DVD package called Elect the Dead Symphony. The idea turned out to be such a hit that Tankian is spending most of June in Europe performing symphonic interpretations of the album.

At the moment Tankian plans only two American recreations of Elect the Dead Symphony: one in Atlanta and the other at the Greek Theatre. The Greek is putting an orchestra together especially for the July 30 performance.

Warped Tour Battle of the Bands

The 14th Annual Ernie Ball Vans Warped Tour Battle of the Bands is now underway, and as usual, there are huge rewards awaiting the winners. Here’s how it works: Interested performers register and upload at least one sample of their music at battleofthebands.com. Then, votes cast by fans determine the top 100 acts in each market the tour stops in. From there, industry professionals choose four winners who get to perform on the Ernie Ball Stage in their home market alongside acts like Eyes Set to Kill, Emarosa and former Battle of the Bands winners Mayday Parade.

At the conclusion of the Warped Tour one of the four groups will be chosen as the big winner, and they’ll take home a $15,000 Guitar Center shopping spree, a two-week performance slot on next year’s tour, a recording session with multi-platinum producer Matt Squire and goodies like customized Vans Shoes and Atticus Apparel packages, a full Ernie Ball Music Man endorsement and more. Fans can cast a vote once a day at battleofthebands.com.

The folks at Rockstar Energy Drink and 4 FINI, Inc., the company that produces the Warped Tour, have announced the date and talent lineup for the first annual Country Throwdown Tour. The multi-stage event comes to the Verizon Wireless Amphitheatre in Irvine on June 19 and features headliners Montgomery Gentry, Jamey Johnson, Little Big Town and Jack Ingram.

Some of the acts appearing on the side stage are the Lost Trailers, Emily West, Eric Church, the Eli Young Band and Ryan Bingham and the Dead Horses. Bingham just won the Academy Award for Best Original Song for “The Weary Kind,” a tune that appeared on the soundtrack to the film Crazy Heart.

There will also be a stage set up in the Bluebird Café tent where emerging singer-songwriters like Cory Branan, Ashley Ray, Brad Tursi, Heather Morgan and Sarah Buxton will perform “in the round.” Ticket info, artist news and free MP3s can be found at countrythrowdown.com.

The Olympics are over, but Vancouver is still going for the gold with its musical acts. One of the city’s favorite bands, Hot Hot Heat, has signed with Silver Lake-based Dangerbird Records (Silversun Pickups, Minus the Bear) and has a new album called Future Breeds ready to drop this summer.

And eclectic band Brasstronaut is making their first ever L.A. appearance; expect to hear flugelhorn and EWI (wind synthesizer) in the mix when the six-piece group plays music from their Mt. Chimaera album at the Viper Room April 8.

A Re-blast from Big Audio Dynamite

It’s been 25 years since the release of This is Big Audio Dynamite, the debut from the band fronted by Mick Jones after the demise of the Clash. B.A.D. performed rap-meets-rock music before the Beastie Boys or Run-DMC and used vocoder effects long before T-Pain came along with Auto-Tune.