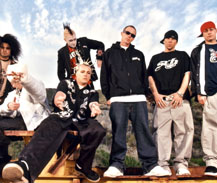 TATS. SPIKED HAIR. CAPS. BEANIES. EYE MAKEUP. COSTUMES. Fans consume the wild and crazy images of a Kottonmouth Kings show, complete with a mummified dancer. But for the past decade, the band’s core message is a more serious and outspoken one that supports freedom, despite the deep controversy shadowing that devotion.

"I think we’ll stop making records once we don’t have anything more to say," says originator of KMK and co-vocalist Brad X, affectionately called Daddy X by longtime members.

The 1994 Kottonmouth Kings founder is now husband to Anna Rose and father to 6-year-old Sky Blue, who just lost her two front teeth. Both of his favorite girls have cameos on the new record titled Kottonmouth Kings – No. 7.

"The concept is Kottonmouth Kings, after 10 years – our most defining work to date. We put the number 7 on it because it’s our seventh (studio) recording," says Brad X.

Their latest CD, which contains a whopping 21 songs, promotes the notion of freedom in all aspects of lifestyle. "You can fit 78 minutes of music on a CD, and we really believe in giving our fans as much as possible for their money," says Brad X. "So we’ll give a body of work that maximizes the listener’s experience."

So if you’re a fan of last year’s Fire It Up or any of KMK’s previous releases such as High Society, Royal Highness or their debut album Stoners Reeking Havoc, Brad X and the L.A.-area boys offer the studio follow-up to Classic Hits Live. Brad X hollers the vanity sentiment, "Happy Birthday! When I started it 10 years earlier, I didn’t believe we’d still be here."

The Kottonmouth Kings’ preference for diversity in song styles was their first expression of freedom. "When we set out the vision, it was more of a hip-hop based group with a punk rock mentality. We’ve let it evolve and grow and take on a life of its own," he says. "We wanted to do reggae, stony groove and hip-hop instead of falling into a stereotype."

After surviving a decade and a million records sold, sub-culturists are obviously supporting the Kottonmouth Kings’ philosophy. Brad X believes fan devotion falls under at least one of three categories: "Obviously, I would attribute it to the music. But No. 2, I think they like our live show. No. 3, I think they connect with the message of personal freedom and the lifestyle of the band."

Additionally, "They like that we stand up for marijuana legalization," says Brad X, which is the No. 1 reason why KMK has been banned from a number of radio and record stores across the country. With a career catalog of 300-plus songs bearing titles such as "So High" and "Bad Habits," conservatives seem to view them more as menaces to society, smoking reefers on stage and promoting state-by-state marijuana laws to educate their listener base.

Family man Brad X defends his actions. "I think there’s a deeper underlying message of freedom that goes with marijuana."

He then rants against dominant societal forces of the past century that have deemed the spiky-leaf organic material illegal. "Marijuana is really the perfect plant. It has medicinal purposes," Brad X says with conviction. "It can be used for clothes or fuel. Whether you smoke [it] to get high, that’s your personal preference. Like anything else, it will have negative effects if you abuse it. Too many carrots are not good for you."

KMK’s latest songs include "Piss Test," which speaks about revolting against drug screening in the workplace, "Let the Sunshine" which advocates peace, and "Put It Down" a song featuring Cypress Hill. Kansas City guest rappers Tech N9ne appear on the homage "F.T.I.2."

Kottonmouth Kings – No. 7 and the companion DVD for the first single "King Klick" are currently available. Due to an ankle injury to KMK’s D Loc, the June 10 show at the Key Club in Hollywood is now a KMK CD Listening Party where you can meet and greet band members. Performances will include Sub Noize Souljaz and OPM, featuring solo rapper Big B and Mower. For more information, visit www.kottonmouthkings.com.