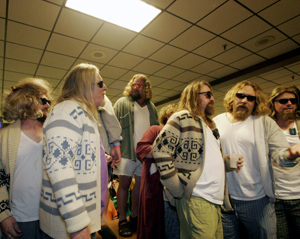 OK, dudes. It’s break time. No I won’t break you off a piece of that Kit Kat bar, but don’t sweat it, dude. Dude. I don’t quite know how to use that word seriously, and every time I try to use it nonchalantly, I think of the original dude. You know, the man. The greatest dude in film history: Jeffrey “The Dude” Lebowski, the ultimate L.A. slacker.

If anyone could relate to a rich do-nothing from Los Angeles who spends all of his time sleeping, eating or bowling, it’s some of us here in Los Angeles. Although we are the busiest city in the world, according to ourselves, we also have those select few among us who live off a fortune they did not amass on their own. Gosh, man, way to piss on my rug.

I’m hoping I’m laying my allusion on as thick as I think I am. Otherwise, you may come to the conclusion that I’ve completely lost my marbles. Really, just chill, dude. It all has a meaning.

In the Coen brothers’ film The Big Lebowski the word “dude” is spoken around 160 times and once in text. The Dude says “man” 147 times in the movie. That’s approximately 1.5 times a minute. The Dude drinks nine White Russians during the course of the movie (that’s two parts vodka, one part coffee and one part cream served with ice in a lowball glass).

You know the famous writing-directing sibling duo had our city in mind because they shot the film in the bowling alley at the former Holly Star Lanes near Santa Monica and the 101 Freeway exit ramp. Well, the bowling alley used to be there and has since been torn down. Ironically, an elementary school stands in its place.

The premise of The Big Lebowski is pretty simple. The Dude is your Average Joe who chills around town for a living in peace until one day two angry gangsters mistake him for another Jeffrey Lebowski, a millionaire whose wife owes some bad people a lot of money. Jeff Bridges fully encapsulates the Dude down to every minute detail. As it turns out, most of the outfits worn by Dude in the movie were Bridges’ own clothes. The Jellies sandals that he wears were his own.

Coming for only two days to its hometown, Lebowski Fest is hitting the City of Angels April 2 and 3. First is a screening of the film at a large, highly revered local venue, the Wiltern. Special guests from the film include Jack Kehler (Dude’s landlord), Philip Moon (Woo the Carpet Pisser), Jim Hoosier (Liam) and Peter Exline (inspiration for the story).

The second day consists of the Bowling Party at the Cal Bowl, which includes bowling, costume contests, trivia and more.

Lebowski Fest is a self-proclaimed celebration of all things related to the 1998 Coen brothers cult comedy. Fans of the film (a.k.a. “Achievers”) come from across the United States to drink White Russians, throw some rocks and party with an array of Dudes, Walters and Maudes (not to mention a few Nihilists sprinkled throughout).

How do you know if you’re an Achiever? According to the festival creators symptoms include but are not limited to: the compulsion to inject dialogue into everyday conversation; inexplicable urges to go bowling and/or drive around; and sudden hatred for the popular American band the Eagles.

The First Annual Lebowski Fest was held in 2002 in Louisville, Ky. It was started by two guys who really liked to quote the movie and who idolized the Dude. It wasn’t anything more than a small-town get-together where Achievers could bowl, dress up in Lebowski costumes and live like their Lebowski rock star.

Subsequent fests have been held in New York, Chicago, Las Vegas, Austin and Seattle. The movement has gone so far as to reach active fans in London and Edinburgh.

As a disclaimer, the Coen brothers have nothing to do with the festival. Actually, they maintain a safe distance from the craze they created. However, the fest has been formally blessed by the Dude himself. Jeff Bridges attended the fest in Los Angeles and even graced his many fans and followers with a few songs.