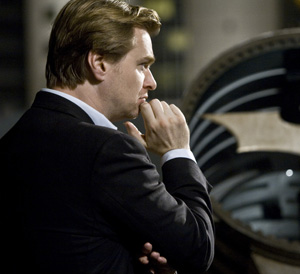 Christopher Nolan on the set of The Dark Knight
(Credit: Courtesy of Warner Bros.)

The mastermind behind this film is Christopher Nolan, who long before he made The Dark Knight, made another one of my favorite films of all time: Memento. If you haven’t seen that film, you should be ashamed of yourself. It’s a widely beloved film that came out in 2000, so you’ve had 10 years to discover it. But the $1.8 billion dollar question that’s probably on everyone’s mind is: What now?

Obviously, there’s going to be another one. Nolan has already started developing it with co-writers David S. Goyer (Blade Trilogy) and his brother, Jonathan Nolan, who wrote The Dark Knight. The question is not whether it’s going to happen, but what it’s going to be like.

Which is not to say that I’m saying the third film is definitely going to be better than The Dark Knight; I’m just along for the ride because I know I’m going to enjoy it regardless. What I will definitely say is that Nolan will make a film worthy of coming after the last one.

Like I said, the hype for this film is going to be earth-shattering, and sometimes the sheer amount of hype for something can sabotage it. I don’t have that problem because regardless of the hype I can objectively view a film for what it is. However, the mass collective can have a film so over-hyped that no matter how good the film is it’ll struggle meeting the massive expectations set before it.

It’s unlikely that the third film will break The Dark Knight’s records, but what’s more than likely is that Nolan will make a brilliant film. In the little that he has said about what it’s going to be like, he has hinted that it will be a conclusion to the story that they’re telling, and I couldn’t be happier to hear that.

When Nolan’s Batman is over, it’s over and should be put to bed. Whoever makes the next Batman film after him should start fresh with their own vision because this trilogy should be its own thing. The worst thing in the world is when things get stale because they’re stretched out longer than they should be. Nolan is a filmmaker who understands storytelling inside and out, and anyone who knows storytelling knows that every story must have an end. Not a tentative end, a real final “that’s it, there’s no more to see folks” end.

But before we get to see that end, we get Nolan’s latest, Inception, starring Leonardo DiCaprio. The trailers for this film already indicate that it’s going to be one of the best of the summer and reaffirm why Nolan is one of the best filmmakers working in the business today. He’s one of the best because he doesn’t pander to, or manipulate, his audience. What he does is tell great stories. And great stories will always triumph over pandering, manipulative, lazy, half-ass, dog doodie storytelling.