Kings Revert Back to Old Habits 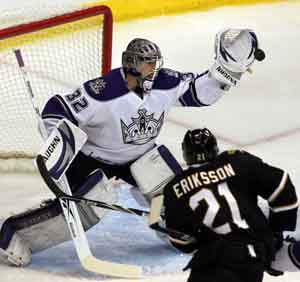 It was supposed to be the year of the new Los Angeles Kings. Historically known for disappearing in March and April, this year’s version of the Kings appeared to be onto something magical this season.

When the NHL took a two-week hiatus for the 2010 Vancouver Games last month, the Kings had grand visions of a 50-win or 100-point season. The team’s goalie, Jonathan Quick, was one victory away from establishing a new franchise record for most wins by a Kings netminder in a regular season. Overall, the team was in the thick of a heated playoff race, working to secure a high playoff seed.

That was before Valentine’s Day. The Kings won 12 of their last 15 heading into the Olympic break and clung onto a respectable 37-20-4 record, then the fourth-best record in the West.

Then March happened. The Kings (42-26-6, 90 points) are nursing a three-game losing streak, sport a 5-6-2 record through the first three weeks of March and are barely holding on to the No. 7 seed.

The team’s recent slide can probably be attributed to poor defense, as the Kings have allowed at least three goals in nine of their last 13 games, winning just one of those nine games. With Colorado (89 points) and Calgary (85 points) hot on the Kings’ skates, Los Angeles is now fighting for its playoff life, what with a three-team battle for the final two playoff spots and just seven games remaining.

The Kings need to start playing some defense and winning some games to make the playoffs and, ultimately, prove they are more fast starters than poor finishers. The faithfully loyal Kings fans deserve better than to be teased early, only to consistently be heartbroken at the onset of spring.