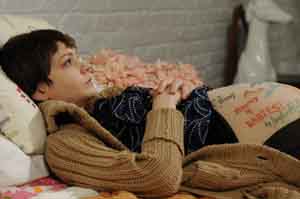 Carey Mulligan as Rose in Shana Feste's The Greatest
(Credit: Courtesy of Paladin)

The Greatest sat with me for quite awhile after I left the screening room. It was both tragic and touching, as it dealt with the loss of a son, a brother and a great love.

The story focuses on a family dealing with the death of their eldest son, Bennett (Aaron Johnson). Father Allen (Pierce Brosnan), mother Grace (Susan Sarandon) and younger brother Ryan (Johnny Simmons) are left to deal with the anguish and pain of losing a loved one. During this traumatic and emotional time, a young woman, Rose (Carey Mulligan), shows up at their doorstep pregnant with Bennett’s child. The film takes an honest look at the wide range of human emotions, both good and bad, while dealing with grief and an unexpected newcomer in their lives.

She felt so blessed when the cast was put together and never in her wildest dreams imagined directing a film with such great names attached.

She reflects, “Pierce was a dream. We never thought that for a first-time director, it being a low-budget script and a drama, it was even possible to turn this project out. We hit the jackpot!”

Feste also flatteringly states, “When Carey came into the room and we read together, she said every line the way I heard it in my head. She was absolutely perfect for the role.”

Mulligan expresses the same sentiment: “I’ve been lucky to be cast alongside people who are brilliant. You learn by example and watch how people work.”

She chuckles, “I’m a great auditioner, but awful when I get on set.”

Mulligan recalls that Brosnan was “incredibly generous, perceptive and receptive when I needed a bit of help out on one of the very sweet scenes.”

After meeting Mulligan in person, I got such a sense of calm and immediately decided that there is a long future for her as an actress. Talent literally seeps from her pores.

The whole cast seems to have a sense of admiration for one another, even Johnny Simmons, who plays the younger brother.

He reflects, “When I was in sixth grade, I wrote on a piece of paper a list of people I would love to work with, and Susan Sarandon was one of them.”

Simmons continues in awe, “How nuts that I was actually on set with her! She was great and took me under her wing. This group was so down to earth and dedicated that it only made you want to do better yourself. I know everyone says that, but it was really true.”

Dashing Brosnan, executive producer and star of the film, seems really connected with his role.

“It felt like a little workshop because we shot this film in 25 days,” he says. “Everyone put his or her best foot forward.”

Mulligan recollects, “We didn’t have very much time to develop our relationships with one another outside of our three-day rehearsal. We just found a great dynamic that worked.”

“Also the writing is what really did it for us,” she adds. “Brilliant writing.”

The film really deals with all layers of grief and every character represented something or someone we could all connect to.

“These characters were all isolated,” says Brosnan. “My character couldn’t reach out to his other son, or his wife, and tried to be the rock, which can ultimately take a toll. Carey’s character was very refreshing.”

He continues, “The whole story was a beautifully rendered piece of storytelling. I thought it would break the hearts of the audience and touch them, and at curtain’s end make them feel hopeful.”