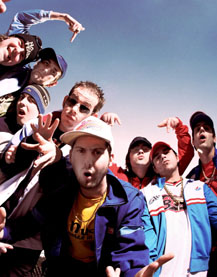 Conventional wisdom says the gun-toting, bloodletting tales of rappers like 50 Cent and The Game represent the true voice of hip hop. But Mr. Love Eggs, from the Welsh rap group Goldie Lookin’ Chain, begs to differ.

"I can’t relate to all that American stuff about men getting their heads blown off," he says. "With me, it’s all about a man eating chips, getting drunk and vomiting on the floor."

Well, not all about that. Mr. Eggs (or "Eggsy" to his friends) also raps about parents who have sex changes, people who mutilate themselves for fun and the upside of suicide. He does so with seven other rappers, who have names like Maggot, Mike Balls and Dwayne Xain Zedong.

The result is a Monty Pythonesque satire on hip hop, or a limey version of Eminem before he got self-righteous. The group’s eagerly sick debut album, Straight Outta Newport, washes up on American shores this week.

Given Goldie’s cavalier attitude toward convention, it’s no surprise that Eggsy describes their creative process as simply going "into a room with a big lager. We drink, smoke and roll around on the floor, laughing and cursing. Then, someone makes a hook out of it and we’ve got a song."

Remarkably, they sometimes stumble onto a sophisticated notion. In "Guns Don’t Kill People, Rappers Do," the group satirizes the idea that pop music causes social mayhem.

"We’re not just people on stage swearing," Eggsy says in a rare moment of seriousness. "There’s other things going on." Like the group’s observation about the escalating fortunes of dead pop stars, in the cut "Self-Suicide":

So where does this refined sensibility spring from? Eggsy describes the group’s hometown of Newport, Wales, as "a standard issue town. People go to work, go to pubs and get drunk."

There wasn’t much more going on in the Welsh rap scene when Goldie formed. Most area bands played rock. The Goldie guys turned for inspiration to American hip-hop groups of the late ’80s and early ’90s, like De La Soul, Public Enemy and the Beastie Boys. At the time, British hip hop was a sad thing, most rappers serving up bad impersonations of Americans. "That sounds pretty dumb if you’re from Leeds," Eggsy says.

In the last few years, the U.K. rap scene began to heat up as performers like the Streets, Dizzee Rascal and M.I.A. used local experiences to create something of their own.

The members of Goldie weren’t as careerist as those artists. They’d been performing mainly to amuse themselves and to kill the boredom of their day jobs. Eggsy says he worked in a second-hand clothes shop for "horrible women. I used to leave messages in the pockets that said ‘Help me, I’m a prisoner in a sweat shop.’"

That got him fired, as did a stunt he pulled at his last job, in the local passport office. When people die, their relatives are supposed to turn in their passports. Eggsy devised a game in which he and his friends would yell "dead man walking" whenever they got a passport back. His bosses weren’t impressed.

Meanwhile, Goldie played the pubs at night, and, by 2003, their fan base began to blossom. They were flabbergasted when their demo tape got them signed in April 2004.

Their name is a joke on American rappers’ obsession with bling. "We wear plastic chains painted gold," Eggsy explains. "It shows you can live a glamorous lifestyle on a budget. People will ask us how much the chains cost. We say, ‘Two pounds.’"

Such wit attracted lots of U.K. press and helped Goldie’s album crack the Top 5. It has sold more than 200,000 copies in the U.K. It remains to be seen if their music will translate to the U.S., especially given the lyrics’ dense allusions to local pop culture icons. But Eggsy insists you don’t have to get every reference to get hooked on Goldie.

"Even if you don’t understand it," he says, "you can still enjoy watching a bunch of idiots running around in track suits swearing in rhythm."