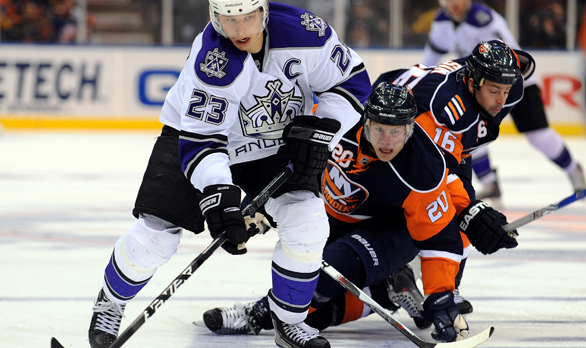 Dustin Brown and the Kings hope to skate into the playoffs.
(Credit: John Dunn/Newsday/MCT)

It has been a promising 2009-2010 season for the Kings, but last weekend’s contest against the hated Anaheim Ducks may have been a sign of bad things to come for Los Angeles.

On the bright side, winning two of their last four games, the Kings (44-27-7, 95 points) will set a franchise record for most wins in one season and should surpass the 100-point mark for just the third time in team history.

Two things have helped the Kings put themselves in a position to make this season one of the greatest ever in franchise history: a 26-1 record when scoring four-plus goals in a game (including an 8-3 shellacking against Vancouver on Thursday) and a 29-0 mark when leading after two periods.

Make that 29-1. When the second period ended on Saturday evening at Staples Center, the Kings led 1-0. Alas, the Ducks managed to win the game in a shootout, taking a 2-1 victory back to Anaheim.

As the Kings enter the final week of regular season play, the players have to wonder if their first loss after a second intermission lead is part of a bigger problem – the inability of the Kings to finish a season strongly. Since the Winter Olympic break, the Kings are 7-10-3 and are struggling to secure a playoff seed.

Sure, the Kings will probably earn a playoff berth this week, what with winnable games against Anaheim, Phoenix, Edmonton and Colorado (with the contest against the Avalanche the only one away from Southern California).

No team wants to enter the postseason on a losing note, but the Kings are currently on pace to do just that – again. The Kings need to return to their winning ways if they want this season to be the one that changes the franchise’s future fortune.

All stats as of April 5.