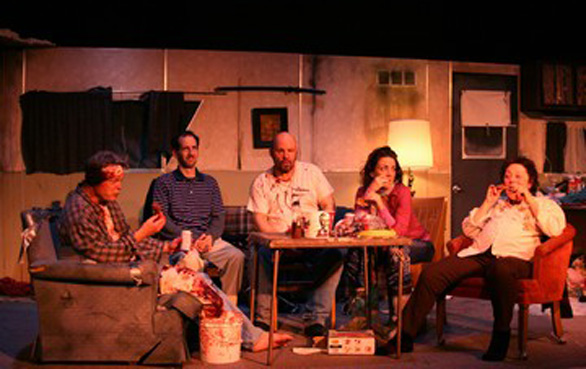 It was gory, bloody, dark, but very funny.

“Buffalo Hole” is set in North Dakota, when the temperature is 15 below zero. Braggert Strong is holding his father, Patton Strong, captive for lying about the Congressional Medal of Honor he received years ago in the service.

Braggert intends on killing his father, who ultimately was not regarded as a good parent by his three children and ex-wife. However, before doing so, Braggert is awaiting the arrival of the entire family to say their last words to the old man.

The arrival of Jessop Strong (the only college graduate of the family) comes first, and he soon finds out that his father is missing a toe and hanging from the ceiling tied on a chain in Braggert’s room. Hilarious laughs are delivered when these two brothers meet at the “shit hole” where Braggert resides.

By this time it is evident that Braggert is psychologically unstable after having suffered enormous abuse from his father as a child. Then again, the entire Strong family is dysfunctional, and portrayed by Eva (mother) and Sara (sister).

Eva is an old, pregnant mother who drinks beer and whiskey to relax and feel comfortable with reality. Sara appears to be headed in the same direction. As soon as all five family members come together, they resemble the family in the movie The Devil’s Rejects. (There is no killing in the play, however.)

Braggert eventually learns that his father honestly won and attained the Congressional Medal of Honor, as his family laughs at him because he misunderstood a story his father described when he was drunk. Braggert apologizes, but still amputates a foot.

“Buffalo Hole” is a story of revenge and misunderstandings. It depicts a family who has struggled to be happy, especially with the alcohol problems of the father and, apparently, the mother.

How dysfunctional is the family? Well, they are all eating Kentucky Fried Chicken together in the end as if nothing has happened.