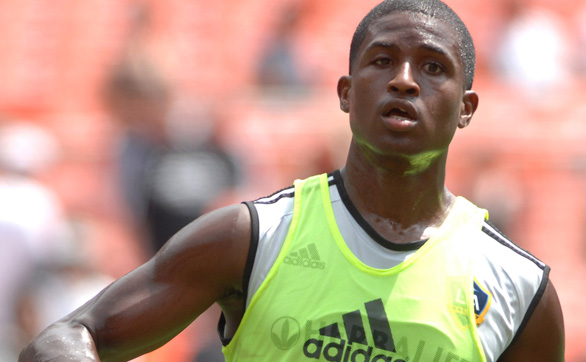 Two scores from Edson Buddle and solid defensive play led the Galaxy to a 2-0 victory over Chivas USA in the SuperClasico April 1 at the Home Depot Center before a crowd of 19,805.

“For the game, we played well defensively,” coach Bruce Arena acknowledges. “I think our form played well and played hard. It was a challenging game for us.”

An early goal at the seven-minute mark from a Buddle header set the tone for Los Angeles. After a few dribbles, Landon Donovan drove a ball to the right flank, where Sean Franklin then connected on a well-crossed pass into the box. Buddle did the rest in his second score of the campaign, as he triggered a potent header to the back of the net. Donovan and Franklin received an assist.

“Sean [Franklin] was able to put in a good ball for a split second,” Buddle comments. “I didn’t think I was going to get to it, but I just decided to run hard and when I realized I could get it, I got a good header.”

In all of Buddle’s goals thus far, Donovan has been highly active with him.

“I wanted to be more competitive and involved in the game,” Donovan says. “I enjoy winning. I want to win, so whatever my role needs to be to help us win, I’ll do that. I do enjoy helping other people succeed, too.”

Only two shots on goal were what the Galaxy needed in the contest to record both scores. The second came in the 87th minute when Donovan provided a through ball to an open Buddle, who finished with class in the upper left corner of the net.

For the season, Buddle now has three goals and Donovan three assists. “Buddle has been great. He is being rewarded for all the hard work he did in the off-season,” Donovan remarks. “When he is healthy, he is as good as any other forward in this league.”

Galaxy’s win improves their record to 2-0 with six total points after two matches. The group next plays at Houston, where they will face the Dynamo in their first road affair Saturday at 5:30 p.m.

“It is another tough matchup next on the road,” Donovan states.