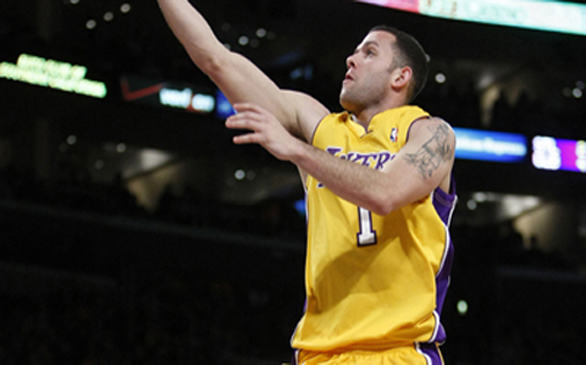 He played high school ball at Birmingham and Taft in the San Fernando Valley before he went on to grant his services to UCLA in Westwood. And now, guard Jordan Farmar is under his final contract year with the Los Angeles Lakers.

Farmar, who is 23, has basically played basketball in his hometown for his entire life, but this summer a colossal decision in his career approaches.

“It will be time to negotiate in the summer. We are just focused on winning a championship right now,” he says. “In terms of free agency, that will not be active until July, so we [the Lakers and Farmar] will have a lot to talk about then.”

Farmar has already earned one championship ring with the Lakers. This unique piece of jewelry came in the 2009 season after the Lake Show powered their way against the Magic with a 4-1 series win in the Finals. During that playoff segment, Farmar stepped onto the court for 20 games while recording nearly five points and two assists per game.

As of now, the Lakers have a three point-guard rotation.

Asked about that, Farmar comments, “Everyone gets opportunities. We do not have a guard to dominate the offense, so you just have to be aggressive and really help the team any way you can – whether it is to speed up the tempo of the game or knock down shots.”

“I love playing with Jordan Farmar,” guard Shannon Brown remarks. “He is easy to play with and has a high basketball IQ.”

Brown goes on to call him relentless.

Farmar, who resides in Redondo Beach, stays active off the court as well. He has been involved in multiple philanthropy efforts, highlighted by his 2008 trip to Israel. During his visit, Farmar directed a basketball camp where Israeli and Palestinian kids set differences aside in order to play hoops together. Among other things, he created Hoop Farm at UCLA, where youngsters are encouraged to be eco-friendly.

“He is a great person. I call him ‘little pro,’” forward Lamar Odom states, laughing. “He has had a great career so far. I wish him all the best as far as free agency is concerned.”

A 26th overall selection in the 2006 NBA Draft, Farmar has had his share of prominent moments. Farmar’s career-high in points came in 2008 when he tallied 28 against the Miami Heat at home. His most successful season with the Lakers came in 2007-08 when he averaged 9.1 points, 2.2 rebounds and 2.7 assists per contest. During that campaign, he posted double figures 37 times, led the squad in scoring in one affair and posted 46 percent in shooting from the floor.

Forward Pau Gasol offers his perspective on the young point guard: “Farmar is a player who provides a lot to the team, especially his ability to modify the rhythm of the games. He has a lot of potential. I want him back on the team. He is someone who brings energy from the bench. Hopefully, he gets what is best for him. If he wants to continue playing here and the team wants him back, then that would be great.”

One interesting fact about Farmar, other than his non-consumption of alcohol, is that he became the first player in NBA history to have played in both an NBA and NBA D-League game in the same day in 2007.

Just like any true athlete, Farmar played numerous sports growing up. He enjoyed playing football, baseball and soccer, but basketball is where his true passion lies.

“I have been playing since I was four years old at a YMCA with my friends. I have not put the ball down ever since,” Farmar states. “I knew this was what I wanted to do since day one. I just love it.”

A true baller and ambassador of the sport, Farmar’s favorite things about the game are its intimacy with the crowd and the competitive nature surrounding it. He goes on to mention the personal one-on-one matchups players have; He idolizes Magic Johnson and Michael Jordan.

Hopefully, after the Lakers take care of business in the playoffs during this upcoming summer, Farmar will have a new contract offer from the Lake Show.

“Right now, I am just trying to play basketball and do my best,” he says. “I know I can play, and they know that as well.”

The Lakers should simply re-sign Farmar. This would be a smart and safe move for the organization, especially because of Derek Fisher’s imminent aging and route to retirement.

Farmar has embellished his persona with the purple and gold.

“He is a good guy. He has accomplished a lot at such a young age,” Gasol says. “He has a lot coming to him in the future, and step-by-step he will get better as a player.”

The Lakers face the Nuggets in Denver April 8 and Timberwolves in Minnesota April 9, but return home to host the Trail Blazers April 11 and Kings April 13.