The Sea and Cake: The electro-pop band’s work is never done 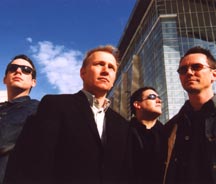 It’s hard not to like a guy who’s oblivious to the modern-mod garage new wave.

"Right now I’m not really sure what’s going on. I’ve noticed [the trend], but it’s not like I’ve actually listened to it," says Sam Prekop, the articulate frontman for the Sea and Cake, a band about which critics tend to wax such effusive phrases as "unprentitious," "post-rock" and "elegant pop."

"I catch wind of the various types that come and go," he continues. "But I don’t always feel compelled to listen to them. [And] I don’t think One Bedroom could be misconstrued as a garage record."

One Bedroom, the sixth full-length from the Chicago outfit, is much more along the lines of easy-electro-pop-soft-rock-listening than thrashy-dead-leaves-on-the-dirty-ground guitar rock. The day-dreamy melodies, trademark hushed vocals, Nintendo beats and a stable marriage of bleeps and bloops to a gentle guitar all make for a hip muzak that’s the opposite of aggressive, while containing a passive and quiet confidence.

Already dubbed "too perfect" by listeners, and despite a later-than-planned release date, One Bedroom seems ready for uncomplicated success. Tracks from the LP were debuted at live shows, and as Prekop notes, "the new stuff seems to be going over pretty well. It seems like in the past, we’d try out new songs, and if people didn’t know them yet, the response was maybe a bit less than enthusiastic," says Prekop. "But this time around, it seems like people are at least acting like they already know the song."

Maybe fans thought they were hearing hidden tracks that they’d slighted from 2000’s Oui, which sounds looser and less electric than One Bedroom. "A main difference [between One Bedroom and past albums is that]... I felt like [this time] when they pushed ‘record’ [in the studio that] ‘Okay, now is the time to perform this song,’" explains Sam. "So I think that feeling maybe and hopefully came across on this record."

The ten-track record’s most notable cut might be the Sea and Cake’s interpretation of David Bowie’s "Sound and Vision," a group favorite. The cover is easily recognizable, but distinctively theirs: all instruments (whether it be the vocals, guitar or bass line) are so pristine and feel like clean cut layers that it makes the lines between this cover and Bowie’s original seem to comfortably blur.

Sound and vision is something that encompasses all of the group’s creative endeavors, whether in the Sea and Cake or not. Prekop is a renowned painter with several shows under his belt and a career as a photographer on the side (he’s responsible for One Bedroom’s cover photo), and released a self-titled solo CD in 1999. Bassist Eric Claridge has also been working on a solo album, while continuing his painting/illustrating career that includes regular contributions to "The Chicago Reader." Guitarist Archer Prewitt continues to create his Drawn and Quarterly-produced Sof’ Boy comics and released his own solo album, titled Three. Drummer and Tortoise member John McEntire has engineered numerous records in his Soma Studio, including Oui and One Bedroom, and recorded the soundtrack for the John Hughes-produced film Reach the Rock.

So it makes sense [to them, at least] that as the band prepares for what Prekop blithely labels "Sea and Cake chores"——a full-blown tour of the United States (after touring Japan and Australia in January)——they’re also currently working on a new EP. For the latest news about the band (and there’s bound to be some any minute now), go to www.theseaandcake.com