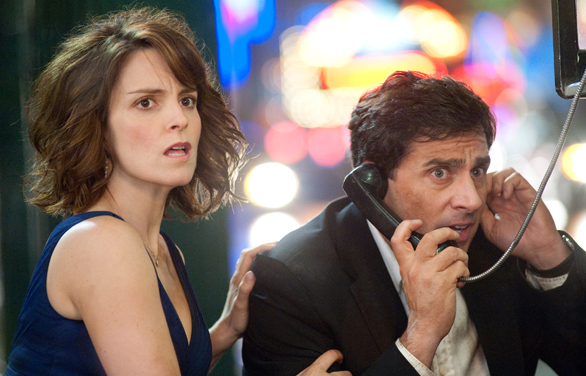 Marriage, even for the best of us, can sometimes lose its luster. The monotony of waking up beside the same person day in and day out has soured a number of people from even bothering to take the plunge in the first place. Add the screaming, pooping, tantrum-having pitter-patter of little feet, and those once-romantic “I do’s” can begin to feel like a bad case of the “Hell no’s!” Unfortunately for some couples, it’s hard to inject lust back into marital relations once it’s gone.

Claire and Phil Foster (Tina Fey, Steve Carell) are beginning to feel the pangs of a long-term union. They happily plod along in their suburban New Jersey existence – he, as an accountant and she, as a real estate agent. To keep the spark in their marriage, Claire and Phil have date nights at a local restaurant. However, you could set a watch by the routine – all the way down to the entrees they order and the conversation they have over potato skin appetizers.

One evening, the couple decides to mix it up a bit by going into nearby Manhattan for an extra-spicy date in the city. They leave the kids with their snarky babysitter (“Gossip Girl”’s Leighton Meester) and head to an über-hip downtown hotspot frequented by models celebrities and a scattered assortment of D-bags. After waiting around at the bar for a table, they decide to jump a claim on another couple’s reservation. Claire and Phil Foster become “The Tripplehorns.”

Dinner is great fun; the food is amazing and for once in a long time, so is the conversation. That is, until two thugs (Jimmi Simpson, Common) usher the couple out of the restaurant. In what becomes a HUGE comedy of errors, Claire and Phil wind up fighting for their lives and dodging the bad guys while getting to the bottom of some grossly illegal activity that can be traced all the way to City Hall.

Date Night is a hilarious comedy directed by Shawn Levy (Night at the Museum, Just Married). He takes a departure from the dark humor that has become so popular in recent years and, instead, guides viewers through a humorous exploration of 1980s-style buddy comedies – this time, for the married set.

Levy confesses that he had a blast dreaming up the roster of actors who would act out the over-the-top action and humor within the film. One scene garnering early buzz in the film is when celebrated young actor James Franco and screen siren Mila Kunis steal the show as a sleazy young couple who play a huge part in the Tripplehorn saga.

While Franco has expanded his repertoire recently by appearing on ABC’s venerable daytime program “General Hospital,” he’s nevertheless a huge box office draw, as is Kunis with her recent roster of breakthrough performances. Levy was thrilled that everyone wanted to be on board.

“Talent likes being with talent,” he says, adding that his casting success came simply by dreaming up people who’d be great in each role and approaching them with an offer. No one capitalized on their fame and image more than Mark Wahlberg. As a shirtless lothario, he pokes fun at his days as a Calvin Klein model.

“I play a guy named Holbrooke Grant, who is a security expert who Claire and Phil come to for help,” he explains. “They catch Holbrooke at a bad time; he’s with his beautiful Israeli girlfriend.”

But perhaps the biggest shocker and most pleasant surprise in Date Night is all the wild action. Fey and Carell succeed as a slapstick-y Bonnie and Clyde, bashing around New York City in a number of outrageous sequences. Most notable is a high-speed car chase that is sure to send pulses racing. Fey goes from prim and proper soccer mom to Danica Patrick on ’roids in one fell swoop.

“I thought all of the action stuff was really fun to do,” admits the comedienne.

For Fey, it was the simple act of her character shedding her inhibitions (and wardrobe) that made her role so easy to get into.

“Once I lose my purse and coat, it was just me and my arms for the night,” she jokes.