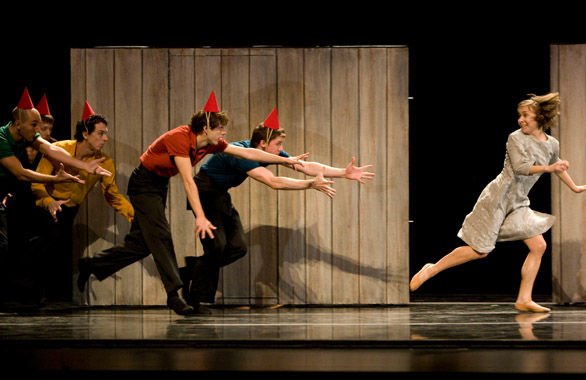 2009 college graduate Jacqueline Burnett is just one of the young starlets of Hubbard Street Dance Chicago (HSDC), performing as part of the 2009-2010 season of Glorya Kaufman Presents Dance at the Music Center. Below, Burnett takes us on a journey through the mind of a contemporary mover.

How did you get into dancing?

Both of my older sisters danced before me, by the encouragement of my mother and her interest in the art form. Before I could even walk I became a muse and a central figure in my sisters’ early choreographic works. Dancing was inevitable.

How did you get involved with HSDC?

Hubbard Street was a company that I had admired and known about as a teenager, but it wasn’t until college that I actually had any type of contact with the company. I attended the San Francisco Conservatory of Dance where Glenn Edgerton was teaching Jirí Kylián repertoire. That summer I felt how inspired and challenged I was by contemporary movement.

The following fall, Glenn was making the transition to becoming the Artistic Associate for Hubbard Street, so we had kept in touch and I was able to go to Chicago and audition for him, Jim Vincent (former HSDC Artistic Director) and Lucas Crandall. In just a few months, January 2008, I was hired as a Center Apprentice for Hubbard Street. As the Center Apprentice, my job position sat between the two companies – Hubbard Street 2 (HS2) and HSDC – meaning I could learn the repertoire of both companies and rehearse and perform where I was needed.

Hubbard Street 2 is essentially the junior company to the Hubbard Street main company. It is made up of six dancers ages 25 and younger, who all are eager to learn as much as they can about the contemporary dance world, and all show the promise and artistic integrity to hopefully be in the main company one day or another main company around the world. They are responsible for many of the community outreach programs that Hubbard Street is involved in, such as performing in schools, doing residencies at schools and dance schools, and also teaching.

What are the best parts about being a member of HSDC?

There are so many “best parts” about being a part of HSDC, and I don’t think they can be ranked because they all go into producing the high quality work that we present. The community that we build is incredible – so many compassionate, talented artists and minds.

The repertoire we are able to learn and perform is both choreographed on us and reset on us by some of the best contemporary choreographers in the world. We are able to travel and interact with people of different cultures and perform for audiences that may have an entirely different viewpoint or experience of our work. And we have the advantage of highly trusting our artistic director and artistic staff in presenting the company in the best light. This trust is also returned to us, as dancers, so we really are given an environment where we are free to explore and express ourselves as individuals and artists.

Tell us about the piece you will be performing at the Music Center.

The piece I will be dancing in is “Tabula Rasa,” choreographed by Israeli choreographer Ohad Naharin. In October, we toured to Israel and were able to rehearse with Ohad in Tel Aviv. This work is one of his earliest and just as stunning as many of his later works. Dancing it is a physical and mental journey, and the experience is always dependent on the atmosphere that the dancers create onstage with each other.

What are some of your goals as a performer?

I always hope to be a captivating performer – to send people’s minds in different spirals and unrecognized spaces.

What are the hardest things about being a dancer?

The hardest part of being a dancer is dealing with yourself everyday – having to be in tune physically, emotionally and mentally, and then being critiqued on what and who you are that day. But, along with being the hardest part, it can also be the most rewarding.