When You're Strange: The Doors open up on the big screen. 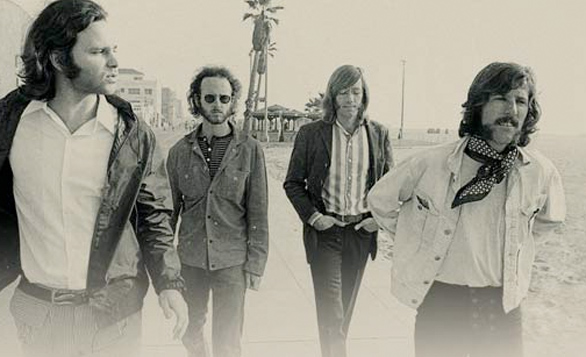 Peek behind the Doors.

I enjoy a compelling story as much as the next guy. Here’s one of my favorites:

A couple of students meet while attending film school at UCLA. After graduating and going their separate ways, they run into each other by chance. Their friendship resumes. They, along with a couple of other friends, decide to start a band. The group soon develops a sound that’s neither expected nor mainstream; it’s a sexy mix of Latin influences and jazz percussion interlaced with a sinister circus-like organ thread throughout. The lead singer is especially magnetic. Sure, he may have been the film school weirdo, but on stage, he’s magic. He’s sex, drugs, heaven and hell all rolled into one. Too bad the kid’s substance abuse problem has gotten out of hand. Next thing everybody knows, he’s sinking – headfirst – into a downward spiral that is destined to end poorly.

Now, this may seem like the cautionary tale of a tragic pack of Silver Lake hipsters, but in actuality, it’s the story of music’s most timeless and electrifying act. That’s right: You have just been treated to the legend of the Doors.

When You’re Strange is a clever documentary about Jim Morrison, Ray Manzarek, Robby Krieger and John Densmore told through the group’s own archival footage. It gets an added boost of storytelling with powerful narration by Johnny Depp. The film explodes with never-before-seen performances and short films starring Morrison in all of his iconic glory.

Still, with 40 years and countless recordings of historical and pop culture significance, it’s the Doors’ keyboardist Manzarek – still bold, vibrant and cool as ever – who manages to keep all the hype surrounding himself and his cohorts to a surprising minimum.

“If you think of yourself as a rock star,” he cautions, “you’re a fool.”

“We should’ve tried harder to stop him,” laments Krieger of Morrison’s substance abuse and subsequent death at the age of 27. But Manzarek chimes in, protective as ever, offering a bit of absolution.

“How were we going to get him to stop?” he asks, willfully. “[Jim] was a kid. But this was like your kid – on steroids.”

In the years since “Riders on the Storm” and “Break on Through,” the band have also seen its ups and downs. Legal wranglings between Densmore and Manzarek and Krieger caused a years-long rift within the band that has only recently been mended.

Each has become extremely protective over the rights and permissions of the group. Recently, when Jay-Z approached the Doors about sampling “Five to One” for his song “Takeover,” it was Densmore who held out. It wasn’t until the band received a heartfelt e-mail from the rapper that Densmore relented and gave his consent. However, no love has been lost over these protective attempts at preserving the Doors’ brand, especially through Manzarek’s eyes.

“There’s nothing like playing in concert with your fellows,” says Manzarek, joyously.

For fans, there is nothing on earth better than the Doors.


When You’re Strange releases in select theaters April 9.
Article posted on 4/6/2010
This article has been viewed 1420 times.